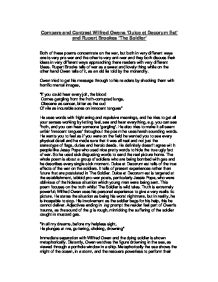 Compare and Contrast Wilfred Owens 'Dulce et Decorum Est' and Rupert Brookes 'The Soldier' Both of these poems concentrate on the war, but both in very different ways one is very pro-war and the other is very anti-war and they both discuss their ideas in very different ways approaching there readers with very different Ideas. Rupert Brooke tells of war as a sweet and lovely thing while on the other hand Owen tells of it, as an old lie told by the monarchy. Owen tried to get his message through to his readers by shocking them with horrific mental images, "If you could hear every jolt, the blood Comes gargling from the froth-corrupted lungs, Obscene as cancer, bitter as the cud Of vile as incurable sores on innocent tongues" He uses words with frightening and repulsive meanings, and he tries to get all your senses working by letting feel, see and hear everything, e.g. you can see 'froth, and you can hear someone 'gargling'. He also tries to make it all seem unfair 'innocent tongues' throughout the poem he uses harsh sounding words. He wants you to feel as if you were on the field he wanted you to see every physical detail and he made sure that it was all real and not just the stereotype of flags, duties and heroic deeds. ...read more.

It is from a personalised view of a soldier caught in mustard gas. This personalised view makes the death of the soldier have a far greater effect. If the death was described in third person the reader would be detached from the action. The complexity of Dulce et Decorum est demands a lot from the reader, yet the message is clear. Hidden meanings of Dulce et Decorum est make the poem far superior to that of the ignorant pro-war poets this makes the message more effective. The Soldier has a simpler content, as there is no need to attract the attention of other poets. "My friend, you will not tell with such high zest To children ardent for some desperate glory," Sarcastically Owen calls the pro-war poet my friend, this implies a fellow poet, Jessie Pope, rather than an actual friend. Referred to, as friend will not offend the pro-war poet yet it shows their responsibility to tell the truth and there unfavourable effect on the youth. Children suggest the young soldiers enrolling to fight and their respect to authority and the writings of poets. Desperate glory implies the vulnerability of the youth and there excitement for the war. Previous passages show in graphic details the truth about glory and the bitterness faced by the youth. Alone, these two lines show that suffering could have been lessened if the ignorance of pro-war poets was less cruel, but more certainly they express bitter emotions towards the war. ...read more.

Brooke is one the pro-war poets that Owen is trying to address and you can see why, because they hide the sick truth behind a curtain of sweet images. For Brooke there is no matter of sadness in death, His body will give back his English values to the earth which he is in, the values which he considers so important, "And laughter, learnt of friends; and gentleness, In hearts at peace, under an English heaven." Brooke uses the word English a lot throughout the poem. It represents not only a country, or a place, but also a set of values and etiquettes. And he is telling the soldiers to be that it is there duty to carry this to other countries and places He tells them that once they are dead and that they have carried this torch across the world they will lose all there sins and there waiting for them will be heaven and off coarse an English one. Overall Brooke just idolises England and he finds that bit of pride that every Englishman has to push them into going to war. After careful study of both Dulce et Decorum est and The Soldier, I find Dulce et Decorum est more effective as the message is clear and convincing. There is a great depth of feeling as Owen feels very strongly about devastation of life at the front and this is very evident in his writing. His personal traumatic impression from the front greatly affects the reader. By Zaid Hadi ...read more.