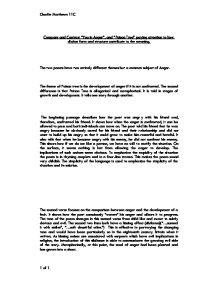 Compare and Contrast &quot;You in Anger&quot;, and &quot;Poison Tree&quot; paying attention to how diction form and structure contribute to the meaning.

Compare and Contrast "You in Anger", and "Poison Tree" paying attention to how diction form and structure contribute to the meaning. The two poems have two entirely different themes but a common subject of Anger. The theme of Poison tree is the development of anger if it is not confronted. The second difference is that Poison Tree is allegorical and metaphorical. It is told in stages of growth and development. It tells one story through another. The beginning passage describes how the poet was angry with his friend and, therefore, confronted his friend. It shows how when the anger is confronted, it can be allowed to pass and both individuals can move on. The poet told his friend that he was angry because he obviously cared for his friend and their relationship and did not want to build up his angry so that it could grow to make him resentful and hateful. It also tells that when he became angry with his enemy, he did not confront his enemy. ...read more.

This positive adjective shows how the poet is beginning to enjoy and admire this growing hatred. The tone becomes unnerving. The final passage concludes the story of how the poet allowed his anger to develop beyond his control. The language is used to portray how strongly the poet wishes for something bad to happen. By this verse the subject has become tainted and evil. The scene is described as being almost beautiful. "When the night had veiled the poles", we picture a dark decaying sky. The sun has gone down on his enemy for the last time. We can see by this point the subject has lost all morality and revels in the success of anger. The poet is "glad" that his foe is dead. This completes the picture of a tall poisonous tree that has been allowed to grow, and the dead person "outstretched" beneath it to show the results of growing anger. ...read more.

He realises the potential danger of the situation, and thus describes their position as being "in mortal danger." We also see how strong his feelings are as he tells how he is prepared to 'risk everything' to save them. The last verse concludes that the anger must not be forgotten or repented as it may have had positive consequences and that although they may have hated each other, this hate only resulted in the realisation of how deep their love truly is. You in Anger and Poison Tree both share the theme that you must confront your anger and be open about it. In Poison Tree, we see what effects it can have on you and others if you let your anger progress further by not facing it. In You in Anger we see that in letting you anger be known there can be positive consequences and things may not only return to how they were before, but may be even better. Charlie Matthews 11C 1 of 1 ...read more.