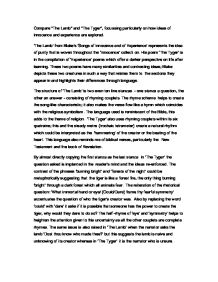 Compare 'The Lamb' and 'The Tyger' by William Blake

Compare "The Lamb" and "The Tyger", focussing particularly on how ideas of innocence and experience are explored. 'The Lamb' from Blake's 'Songs of Innocence and of Experience' represents the idea of purity that is woven throughout the 'Innocence' collection. His poem 'The Tyger' is in the compilation of 'Experience' poems which offer a darker perspective on life after learning. These two poems have many similarities and contrasting ideas; Blake depicts these two creatures in such a way that relates them to the sections they appear in and highlights their differences through language. The structure of 'The Lamb' is two even ten line stanzas - one stanza a question, the other an answer - consisting of rhyming couplets. The rhyme scheme helps to create the song-like characteristic; it also makes the verse flow like a hymn which coincides with the religious symbolism. The language used is reminiscent of the Bible, this adds to the theme of religion. 'The Tyger' also uses rhyming couplets within its six quatrains; this and the steady metre (trochaic tetrameter) create a natural rhythm which could be interpreted as the 'hammering' of the creator or the beating of the heart. ...read more.

Considering this 'The Lamb' could be seen as representing a simpler time when things were made by hand and 'The Tyger' could represent the shift of manufacturing demonstrating the bad social product of industry. Also the reference in 'The Lamb' to its wool being 'clothing' can be viewed as nature being exploited by man as we use it for our own means. Another common theme throughout 'The Tyger' is that of body parts, they are all human apart from 'wings' which suggests something supernatural. The human body parts: 'hand', 'feet', 'eyes' and 'shoulders' could lead to anthropomorphism, showing humans as 'evil' as the creature being described. Also by giving the creator human tools the same effect is created but instead likens God to humans. Perhaps both of these complimentary poems could be seen as an allegory; the two sides of humanity, highlighting the contrast of good and evil which are in all of us. This analogy fits in with the idea of the creator, as humans ask themselves 'Who made [me]' why would a God who created good in us also create evil? Or is this because of free will, after gaining a posterior knowledge we naturally gain evil? ...read more.

This could be an analogy for the ancient argument that we can't have a loving God who created suffering, which is counter-argued by the theory that we just don't understand its purpose. Poetic devices throughout the two poems aid the effective imagery created. The repetition of vowel sounds in 'The Lamb' echoes the sound of a lamb bleating especially the double 'ee' sound. These soft phonetics also make the poem sound pleasant to the ear in contrast to 'The Tyger' which has harsh sounding letters within words such as 'skies', 'seize' and 'spears'. 'The Lamb' uses anaphora and alliteration in the words 'Little lamb' with the end phrase morphing from 'Who made thee' to 'I'll tell thee' and finally 'God bless thee'. The effect of anaphora here is to show a chronological sequence of the narration and reminds me of a religious story. 'The Tyger' also uses anaphora in the word 'what' which is repeated twelve times throughout the poem this emphasises the questioning nature of the narrator and the brute fact of the unknown. These counterpart poems explore ideas of innocence and experience by displaying a sense of what Blake understands by these terms. He contrasts good and evil within a religious framework questioning the benevolent God and questioning humanity. ...read more.