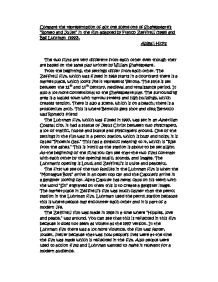 Compare the representation of act one scene one of Shakespeare's &quot;Romeo and Juliet&quot; in the film adapted by Franco Zeffirelli (1968) and Baz Luhrman (1997).

Compare the representation of act one scene one of Shakespeare's "Romeo and Juliet" in the film adapted by Franco Zeffirelli (1968) and Baz Luhrman (1997). Abigail Hicks The two films are very different from each other even though they are based on the same play written by William Shakespeare. From the beginning, the settings differ from each other. The Zeffirelli film, which was filmed in 1968 starts in a courtyard there is a market place, which looks like it represents Verona. The style is set between the 12th and 13th century, medieval and renaissance period. It also a lot more conventional to the Shakespeare play. The surrounding area is a walled town with narrow streets and high buildings, which creates tension. There is also a scene, which is on a beach; there is a proscenium arch. This is where Benvolio gets shot and dies; Benvolio was Romeo's friend The Luhrman film, which was filmed in 1997, was set in an American Coastal city, it had a statue of Jesus Christ between two skyscrapers, a lot of traffic, hustle and bustle and skyscrapers around. ...read more.

In both of the films there are also two main families that are feuding with each other, the Montague's, which is Romeo's family, and the Capulet's, which is Juliet's family. In the Luhrman film, the "Montague Boys" are seen as loud and bold. The clothes that they wear are brightly coloured Hawaiian shirts, which make them stand out. The "Capulet Boys" are seen as the Bad Boys looking like gangsters because they wear black suits, have goatees and arrive in a blacked out car. The camera mainly focuses on Tybalt; he wore metal-heeled boots, which he put a match out with. This could represent the stamping out of a life. The camera zoomed in and did a close up of this. In the Zeffirelli film the Capulet's wore bright yellow and red doublets, hoes and hats. The Montague boys wore blue liverys. The characters seemed a lot calmer and peaceful, even though there is tension between the two families. This could represent the period in which it was filmed. The Zeffirelli film was a lot more faithful to Shakespeare play but it was more exaggerated by repeating sentences, "Do you bite your thumb at me?" ...read more.

I first noticed that editing has been used in the Luhrman film when the newspaper headlines create a montage at the start. This explains what has been happening with the two families "Capulet Vs Montague." The ring, which was also shown at the beginning of the film, could suggest that Romeo and Juliet are in love with each other and their families are keeping them separate. There are also fast shots to create tension between the families, at the beginning of the film, which creates a peaceful and reflective atmosphere. In the Zeffirelli version, Romeo is filmed holding a flower this could indicate that he was in love. There is an outburst of shouting between the two families, "Do you bite your thumb at me?" I think that the Montague's over reacted about this, by repeating themselves and getting louder. That was how the society was at the time that this film was made. I preferred the Baz Luhrman version of the film even though the Zeffirelli film was more conventional to Shakespeare, because it was a lot more modern. The pace of the film was also faster that the Zeffirelli version, which was a lot slower, paced this made it easier for me to understand. ...read more.