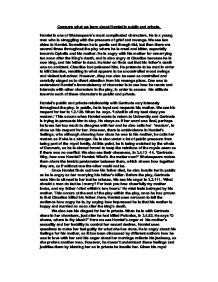 Compare what we learn about Hamlet in public and private.

Compare what we learn about Hamlet in public and private. Hamlet is one of Shakespeare's most complicated characters. He is a young man who is struggling with the pressure of grief and revenge. We see two sides to Hamlet. Sometimes he is gentle and thoughtful, but then there are several times throughout the play where he is cruel and bitter, especially towards Ophelia and his mother. He is angry with his mother for remarrying too soon after the King's death, and is also angry at Claudius because he is now king, and his father is dead. He later on finds out that his father's death was no accident. Claudius had poisoned him. He pretends to be mad in order to kill Claudius, resulting in what appears to be uncontrolled mood swings and violent behaviour. However, they can also be seen as controlled and carefully staged as to divert attention from his revenge plans. One was to understand Hamlet's inconsistency of character is to see how he reacts and interacts with other characters in the play, in order to assess his attitude towards each of these characters in public and private. Hamlet's public and private relationship with Gertrude vary intensely throughout the play. In public, he is loyal and respects his mother. We see his respect for her in 1.2.120. ...read more.

The caesura, acts as a pause in a dreamy way, as if the thought of Ophelia calmed him down. Shakespeare uses this as a sigh, to emphasise Hamlet's love for Ophelia. In public, we see his rudeness to her in 3.1.119. 'Get thee to a nunnery!' This occurs while Claudius and Polonius are watching Hamlet. He is basically telling her to go to a place were she will be a virgin so she can't have sinful children. His disrespect for her might be because he thinks that she is a messenger to Claudius and he feels betrayed by her. This is because she keeps questioning him, and returns gifts that he gave her. Another reason could be that he thinks that she is almost too good for him, and wants to protect her from himself. Shakespeare uses a lot of assonance of 'ee', which makes his words sound more violent and emphatic, and it is also directed at Ophelia in an order, which again makes it violent. This is followed by caesura and a question. The caesura is there to emphasise what he has just said, and for the audience to take it in. The question shows Hamlet's rudeness to her, and how he thinks she is bad. Hamlet shows a strong hatred for women at times. This could be because he has been betrayed by both women who he loves, Ophelia because he thinks she is a messenger and so can't trust her, and Gertrude for marrying Claudius so quickly. ...read more.

Here, his thoughts are focused and although confused about the matter. He uses a lot of imagination, which suggests that he is troubled and wants to escape his fears and feelings. The audience also see him as a man who is depressed, but not mad. The soliloquy is there to tell the audience, the real feelings and worries of Hamlet, and without them people would think he was mad. It also creates tension, as we would want to see how he would behave next. It is important that the audience know he is not mad as to understand his actions further on in the play. Hamlet is a very complex character, with many different sides. As every other Shakespeare character, he is based on human emotional conflicts and relationships. Although difficult to understand his role can be translated to any other period even within the 21st century, as we still live with the same emotional conflicts and relationship problems portrayed. With evidence from the play, we see that Hamlet is clearly a different person in public and private as in public he has to be politically correct and comply with his royal duties, whilst privately he gives way to his emotional conflicts and confused feelings. I believe the real Hamlet is how he appears in private. We see his inner emotions in private and his fake, brave and sometimes mad self in public. Hamlet is a man who loves a great deal, is betrayed a great deal and ends up finding himself and achieving his revenge. ...read more.