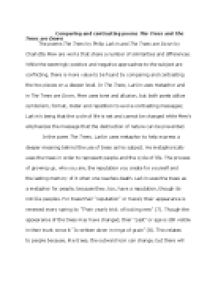 ﻿Comparing and contrasting poems The Trees and The Trees are Down The poems The Trees by Philip Larkin and The Trees are Down by Charlotte Mew are works that share a number of similarities and differences. While the seemingly positive and negative approaches to the subject are conflicting, there is more value to be found by comparing and contrasting the two pieces on a deeper level. In The Trees, Larkin uses metaphor and in The Trees are Down, Mew uses tone and allusion, but both poets utilize symbolism, format, meter and repetition to evoke contrasting messages; Larkin?s being that the cycle of life is set and cannot be changed while Mew?s emphasizes the message that the destruction of nature can be prevented. In the poem The Trees, Larkin uses metaphor to help express a deeper meaning behind the use of trees as his subject. He metaphorically uses the trees in order to represent people and the cycle of life. The process of growing up, who you are, the reputation you create for yourself and the lasting memory of it when one reaches death. ...read more.

Mew is trying to defend and protect the life of the trees; the purpose of this allusion is to help this objective. It also relates back to the defensive tone of the poem. Both poets use symbolism as well as repetition in the relation to springtime. In The Trees, Larkin discusses the springtime as a time of new life, where everything is at its fullest and most beautiful, but also a time to leave the past behind and begin ?afresh? (8). Just as the trees shed their leaves in the fall, they?re leaving behind the old and welcoming the new. With the arrival of spring, the new leaves come and everything is fresh. Larkin reinforces the spring with emphasis on the word ?afresh?(8) in the last line of the last stanza ?Begin afresh, afresh, afresh? (8). What Larkin is referring to is the time of year where life is new and the start of the cycle of life is at its peak with new life taking form again. ...read more.

These set restrictions to the format of the poem follow Larkin?s theme of the cycle of life. That like the format, its set and cannot be changed. The Trees are Down follows a different format. She uses a free verse form and structure. This format reinforces Mews protest that the trees should be left alone to live freely. It also represents the unpredictability of nature and how even though we can try and stop death and whatever comes in one?s way, there?s no stopping the future. Larkin and Mew both utilize similar tools to display different topics and different outlooks on the cycle of life. It is clear by understanding both of the poems that the poets appreciate nature for it natural beauty. Larkin uses metaphor and Mew uses tone, but both poets utilize symbolism, repetition, format and meter to stress the importance of the overall message of their poems, though they may contrast. For Larkin his belief is that what happens to nature and in life shall happen as it?s supposed to happen. Whereas, Mew believes that the cycle of life should not be disrupted and if it?s being threatened, harm can be prevented. ...read more.