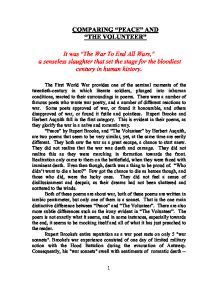 Comparing 'Peace' and 'The Volunteer'.

COMPARING "PEACE" AND "THE VOLUNTEER" It was "The War To End All Wars," a senseless slaughter that set the stage for the bloodiest century in human history. The First World War provides one of the seminal moments of the twentieth-century in which literate soldiers, plunged into inhuman conditions, reacted to their surroundings in poems. There were a number of famous poets who wrote war poetry, and a number of different reactions to war. Some poets approved of war, or found it honourable, and others disapproved of war, or found it futile and pointless. Rupert Brooke and Herbert Asquith fall in the first category. This is evident in their poems, as they glorify the war in a na�ve and romantic way. "Peace" by Rupert Brooke, and "The Volunteer" by Herbert Asquith, are two poems that seem to be very similar, yet, at the same time are eerily different. They both saw the war as a great escape, a chance to start anew. They did not realize that the war was death and carnage. They did not realize this as they were marching in formation towards the front. Realization only came to them on the battlefield, when they were faced with imminent death. Even then though, death was a thing to be proud of. ...read more.

The line is no longer just describing the world, it is making a list of all the negative aspects of that world. It tries to give us a more profound idea of the world that Rupert lived in. It succeeds very well in giving us a lurid description of the world back in the early 1900's, even if it is a trifle ungrammatical. For the full meaning of the line to be realised, the reader must take his time and read it slowly, stressing the "and". The reader can't rush through that line, or the whole poem for that matter, and expect to understand it all. He must take it slowly. Rupert Brooke knew full well the meaning of what he was writing; he was trying to give himself a good reason for leaving Britain and going off to war. He believed life back then was a drag and he used it as an excuse to make his act of foolishness and immaturity seem understandable. If we look at the poem further down, we see that "we have found release there". It seems to me that here we have found release from life as well as society, since "naught is broken, save this body". We have inevitably found death "and he is the worst friend and enemy". ...read more.

He sees them as an achievement. Al thos soldiers who died achieved cleanlsing, Asquith sees all that death as a loss. It is this fundamentally different mind set that makes these poems truly different. These poems are polar opposites when it comes to how they view life. What Herbert Asquith is trying to say does not jump right out at you. To grasp the full meaning of the poem, you have to read between the lines. Once you do, you will find this poem very ironic. Herbert is mocking those silly people who became soldiers and thought that war was all glory and heroism and lost their lives with this belief at heart. In different formats and literary styles, these two poems display the same glorifying attitude towards war. That is why some literary critics regard them as pro-war poetry. Their authors have not become "true trench poets", as they have not experienced the horrors of war. In the view of Brooke and Asquith, the war was some great cleansing fire that would lead to a better world. This made it worthwhile. Their poetry celebrated the "happy warrior". As Paul Fussell has noted in "The Great War and Modern Memory", these two poets'sentiment about the war is "...an emotion so innocent and bizarre, so confident of right and wrong, that it not likely to surface more than once a century." By: Julius Dima 1 ...read more.