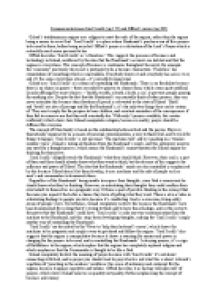 ﻿Comparison between Soul Scrolls (pg 175) and Offred?s prayer (pg 205) Gilead?s totalitarianism regime uses religion to meet the ends of the regime, rather than the regime being a means to serve God. ?Soul Scrolls? is a place where Handmaid?s purchase one of five prayers to be read to them, before being recycled. Offred?s prayer is a distortion of the Lord?s Prayer which is ostensibly much more personal to her. Offred describes ?Soul Scrolls? as ?a franchise?. This suggests the presence of business and technology in Gilead, reinforced by the idea that the Handmaid?s accounts are debited and that the regime is everywhere. This concept of business is continuous throughout the novel, for example the ?ceremony? previously discussed is portrayed to be a business transaction. ?Franchise? has connotations of something which is unavoidable. Everybody knows it and everybody has access to it, and it?s the same everywhere you go ? it?s incredibly impersonal. Gilead uses ?Soul Scrolls? as a means of controlling the Handmaids. There is no flexibility because there is no choice in prayer ? there are only five prayers to choose from, which seems quite artificial. In only offering five exact choices ? ?health, wealth, a death, a birth, a sin?, it prevents people praying for anything else. Despite the fact that the Handmaid?s can mentally think of other prayers, they can never articulate this because their freedom of speech is subverted to the state of Gilead. ...read more.

Offred describes it as having ?roll upon roll? of prayers, which shows Gilead believes in quantity not quality, further emphasising the concept of business and money. Gilead?s regime is described as indestructible. ?The window of ?Soul scrolls? is shatterproof?, which suggests that for the regime to have protected the franchise, they must have feared there would be dissenters. It suggests that not everybody in Gilead accepts it but they don?t dare to express this because of the consequences. There is reference to the spies in ?Soul Scrolls?, ?each machine has an eye painted in gold on the side?, which shows their superiority and that the Handmaids? are always being watched ? there is no escape and this is yet another means of controlling them. Offred tries ?to remember? what the place sold before and realises it was a lingerie shop. This takes away the feminist aspect of women because Gilead attempts to strip women of any wants and thoughts, to make them only want to bear children. If a lingerie shop existed in Gilead?s society as it were then, it would be considered corrupt, which is ironic because Gilead itself is a mire of corruption. The concept of a patriarchal society is reinforced in that ?most of the stores carrying things for men are still open?. Offred?s parody of the Lord?s Prayer, which takes place by an empty garden (similar to how Jesus prayed alone in the Garden of Gethsemane), articulates Offred?s feelings of abandonment and despair. ...read more.

On the other hand, Offred commits to ?Soul Scrolls? because she has too since it?s a sign of faithfulness to Gilead?s regime, and if she didn?t, it would seem suspicious, even if she doesn?t believe in doing it. However, both do criticise Gilead, with ?Soul Scrolls? expressing the pointlessness of it, and her own personal prayer expressing how Gilead is a h**l. In her own personal prayer, Offred has hope for two way communications, and although his name is not known, God does offer some kind of contemplation for Offred, as she works her way through her feelings. ?Soul scrolls? is simply a one way communication because prayers are printed and read to the Handmaids? before being recycled, which shows the uniformity of this prayer. Offred?s own prayer is also in a sense a rebellion from the constraints of Gilead, because although this isn?t her aim, it does go against what Gilead teaches ? that she should not be thinking for herself. When Offred visits ?Soul Scrolls?, she is complying with the ways of Gilead simply to stay out of trouble. In conclusion, Offred?s personal prayer is much more personal than ?Soul Scrolls?, and despite it being a distorted version of the Lord?s prayer, it does signify her desperation for salvation from the regime. ?Soul Scrolls? is something Offred simply goes along with because she has no choice but too, and this offers her no answers to her thoughts because of how autonomous and controlled it is. ...read more.