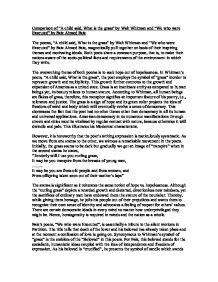 Comparison of A child said, What is the grass by Walt Whitman and We who were Executed by Faiz Ahmed Faiz

Synonymous to Whitman's symbol of "grass" is the emblem of the "Beloved" in this poem. For Faiz, this beloved stands for the socialistic, humanistic ideas coupled with the idea of independence and freedom of expression. As his beloved is "crucified", he presents the symbol of candle which stands for democratic ideals and hope despite utter hopelessness. The touch of beloved's hand is equated to something that brings light and which would refine our being. We are already living in the "darkest lanes". At least, the beloved's touch will enlighten our spirit and mind along with the poet. In both poems, it is observed that death has been viewed positively as one end indicates the beginning of something new. Similarly, the old generations pave way for the new ones. Whitman encapsulates the idea of old generation vs. new generation which is analogous to Faiz Ahmed Faiz's theme. In the last stanza of "We who were Executed", he talks of the new generation who will follow the ideology of Faiz and his beloved, that is, "the lane of desire" which connotes to democracy at a broader spectrum. ...read more.

Whitman praised the individual and he imagined a democratic nation as a unified whole composed of distinctive but equal individuals. In this way, many individuals make up the individual democracy, a single entity composed of various parts. Each entity carries the same weight within a single democracy. In comparison, Faiz is in favour of collective existence. "I" and "you" produce "we" after death, which, like an equation is the solution of separate existence. "We" becomes the entire social class moving towards a particular goal and hence, the element of starkness will eliminate. These concepts of Whitman and Faiz also pertain to the notion of Marxism which will ultimately change the system of the world and bring about a revolution in the nation. Literature is a craft to reach out to the masses and is influential if caught properly. Walt Whitman and Faiz Ahmad Faiz are endowed with extraordinary prowess to influence their nations with their poetry. They never took art for art's sake and this is vividly seen through their purposeful work. With all their idiosyncrasies, both poets are very much products of their time and both poems, "A child said, What is the grass" and "We who were Executed" are worth appreciation. ...read more.