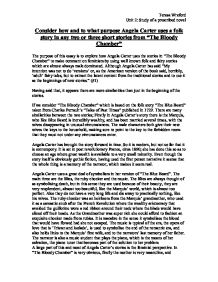 Consider how and to what purpose Angela Carter uses a folk story in any two or three short stories from &quot;The Bloody Chamber&quot;

Consider how and to what purpose Angela Carter uses a folk story in any two or three short stories from "The Bloody Chamber" The purpose of this essay is to explore how Angela Carter uses the stories in "The Bloody Chamber" to make comment on feminism by using well known folk and fairy stories which are almost always male dominated. Although Angela Carter has said "My intention was not to do 'versions' or, as the American version of the book said, horribly, 'adult' fairy tales, but to extract the latent content from the traditional stories and to use it as the beginnings of new stories." (#1) Having said that, it appears there are more similarities than just in the beginning of the stories. If we consider "The Bloody Chamber" which is based on the folk story "The Blue Beard" taken from Charles Perrault's "Tales of Past Times" published in 1729. There are many similarities between the two stories; Firstly in Angela Carter's story there is the Marquis, who like Blue Beard is incredibly wealthy, and has been married several times, with the wives disappearing in unusual circumstances. ...read more.

The music is typical of the era, the opera of love that is 'Tristan and Isolade', is used to symbolise the end of the romantic era, and also holds links to the Marquis' first wife, and to the narrators' last memory of her father. The narrator is also a music student that plays the piano, which is the means of her salvation, the piano tuner that becomes part of the solution to her problem. A large part of this and most of Angela Carter's stories is the feminist perspective. In "The Bloody Chamber" is very obvious, firstly the mother is very masculine, and provides the masculine role for the narrator. The Marquis is portrayed as an evil and controlling male that always has his way. Also the piano tuner is depicted as a useless male that almost jeopardises the narrator, as she ends up having to protect him from the Marquis. There is very little magic realism in this story apart from the key that stains with the blood. ...read more.

At first look the story appears not to have much of a feminine approach to it, Mr Lyon seems to be quite gentlemanly and Beauty's father just seems to be down on his luck. But, "Carter sees this story as summarising a masculine conspiracy to dent women of the chance of ever reaching autonomous, self-responsible adulthood" (#2). Beauty also appears to be as little as an item of exchange between the two men, the father knowingly gives up "his girl-child" (#3), in a trade to regain his wealth. When Beauty's father first enters Mr Lyon's house it seems as though he has stepped through "the looking glass" into wonderland, this is reaffirmed by the inscriptions on the whiskey decanter "eat me"(#4), and the silver dish "drink me"(#5), upon which laid a sandwich for Beauty's father. the spaniel dog wears a necklace of diamonds which symbolises the wealth of Mr Lyon and the femininity of the dog, the dog also symbolises the relationship between Beauty and her father, the dog being the Beast's pet, is how Beauty's father sees her, "his pet" (#6). The white rose is representative of the relationship between Beauty and her father. ...read more.

The essay begins well, with the writer clearly setting out the purpose of the essay. The next few paragraphs clearly link the texts back to folk tales. However, occasionally this turns into 'similarities between 'The Bloody Chamber' and folk tales'. ...

The essay begins well, with the writer clearly setting out the purpose of the essay. The next few paragraphs clearly link the texts back to folk tales. However, occasionally this turns into 'similarities between 'The Bloody Chamber' and folk tales'. The question is asking how Carter uses folk tales – for instance, the essay could have explored how, in using folk tales as a template, Carter plays with and subverts readers' expectations. Instead the writer either directly compares folk tales and 'The Bloody Chamber', or drifts off into analysis which has little to do with folk tales. Although the paragraphs on magical realism and symbolism are analytically sound, there is no attempt to link these back to folk tales. Here, the writer does not answer the set question at all.

The writer uses stylistic devices to structure the essay, which is good as it makes it easy to follow as a reader. There is a good use of context throughout (such as the references to the French revolution and the guillotine). The level and range of analysis is good up to a point; the writer interprets some quotes as symbolism and engages with the text as representative of wider ideas. However, this could go further. The points are not quote-driven and quotations are few and far between – to improve, the writer could use quotes from the text to form points, rather than the other way round. This would show that the writer has not plucked their ideas out of thin air, but have extrapolated from the text. Also, sometimes the writer makes serious assumptions, the largest being “the story itself is obviously gothic fiction”. Although the question of how Gothic the text is is not relevant to the question, the writer could have phrased it better, such as: “some believe the text to be Gothic due to...”. Indeed, the very use of folk tales makes 'The Bloody Chamber' Gothic as Carter breaks the boundaries of folk stories and transgresses. This could have made up an integral part of the essay. In terms of evaluation, the consideration of different perspectives (such as a feminist viewpoint) clearly show the writer thinking from different viewpoints. There could have been more explicit deliberation over which perspective is most relevant, or to what extent folk tales had an impact on the text.
The conclusion is extremely poor; no overall judgement has been reached and the essay finishes on a piece of analysis rather than a gathering together of points made. A sound conclusion could have been formed from evaluation: are folk tales important in the text? Why? How does Carter generally bring this to the forefront?

Spelling is generally adequate, with a few minor errors. The essay as a whole does not flow particularly well, largely due to the poor use of grammar. One example is the phrase, “So it is modern, but not so far that it is contempory.” The word “contemporary” is spelt wrong and the writer begins a sentence with the connective “so”. This is consistent throughout and makes the entire essay seem disjointed and generally poorly written. Regardless of the content of an essay, poor spelling and grammar immediately give an impression of a poorly written essay overall.