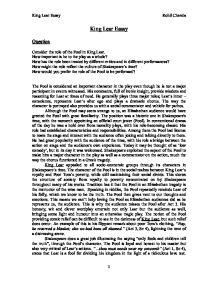 Consider the role of the Fool in King Lear. How important is he to the play as a whole?

King Lear Essay Question Consider the role of the Fool in King Lear. How important is he to the play as a whole? How has the role been treated by different critics and in different performances? How might the role reflect the culture of Shakespeare's time? How would you prefer the role of the Fool to be performed? The Fool is considered an important character in the play even though he is not a major participant in events witnessed. His comments, full of ironic insight, provide wisdom and reasoning for Lear at times of need. He generally plays three major roles; Lear's inner - conscience, represents Lear's alter ego and plays a dramatic chorus. The way the character is portrayed also provides us with a social commentator and vehicle for pathos. Although the Fool may seem strange to us, an Elizabethan audience would have greeted the Fool with great familiarity. The position was a historic one in Shakespeare's time, with the monarch appointing an official court jester (Fool). In conventional drama of the day he was a hold over from morality plays, with his role-becoming classic. His role had established characteristics and responsibilities. ...read more.

By contrast Grigori Kozintsev 1970 film version of Lear keeps the Fool in the play till the end by symbolizing the continuation of life in the sound of a flute he plays (Kozintsev, 198, Foakes, 60-1). The critics Orwell and Tolstoy also had contrasting opinions, with Tolstoy seeing no justification for the presence of the Fool, and Orwell seeing the Fool as integral to the play. This shows directors and critics being anxious about the sudden disappearance of the Fool from Act 3. The disappearance could be justified as Lear has gone mad by this time and cannot relate to the Fool's wit, wordplay etc. Another explanation for his disappearance could be interpreted from Lear's ambiguous line, "And my poor Fool is hanged" (Act 5, Sc 3), where he clearly relates to Cordelia, but recalls the Fool also. This brings us back to the fact of the association of the Fool as Cordelia's representative. Personally I believe that he is important and should be considered a major character, and definitely not cast out of the play. If he were to be taken out it would damage the balance of tragedy verses comedy that has been set up by Shakespeare, which would result in a loss of audience. ...read more.

We derive then from the Fool's honesty an ironic perspective on Lear's situation which maintains that his remarks are as much for the audience, as for on stage consumption. It is clear that Lear's retirement and his generosity in dividing the kingdom are in themselves foolish decisions; the Fool just states the obvious to us. But the Fool does more than that, he derives a more complex view of Lear's character and situation than any other character in the play. Through his wordplay, what seems like wisdom from one point of view, is folly from another, as the Fool brings out in his advice to Kent that it would be wise to abandon Lear, "When a wise man gives thee better counsel give me mine again; I would have none but knaves follow it, since a fool gives it" (Act 2, Sc2). I see the Fool as a channel for many of the play's multiple perspectives, which have no value fixed, and leave no character unscathed. He is more than what he is thought to be because Shakespeare over steps the regular Fools' boundaries. I feel Shakespeare uses the Fool to bring out the point about human actions and values, a point that enriches the whole play. ...read more.

This essay has many strengths. It is generally well written and well structured. Effective reference is made to background reading and to productions of the play, and there is a strong sense of the writer's engagement with the text. The questions posed by the essay title are confidently discussed.
Quotation technique is rather less confidently handled. A quotation should always makes sense to the reader, and this sometimes necessitates setting the quotation more firmly in context and ensuring grammatical integration into the sentence as a whole.
****