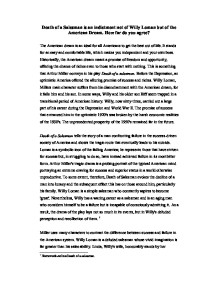 Death of a Salesman is an indictment not of w***y Loman but of the American Dream. How far do you agree?

Death of a Salesman is an indictment not of w***y Loman but of the American Dream. How far do you agree? The American dream is an ideal for all Americans to get the best out of life. It stands for an easy and comfortable life, which makes you independent and your own boss. Historically, the American dream meant a promise of freedom and opportunity, offering the chance of riches even to those who start with nothing. This is something that Arthur Miller conveys in his play Death of a salesman. Before the Depression, an optimistic America offered the alluring promise of success and riches. w***y Loman, Millers main character suffers from his disenchantment with the American dream, for it fails him and his son. In some ways, w***y and his older son Biff seem trapped in a transitional period of American history. w***y, now sixty-three, carried out a large part of his career during the Depression and World War II. The promise of success that entranced him in the optimistic 1920's was broken by the harsh economic realities of the 1930's. The unprecedented prosperity of the 1950's remained far in the future. Death of a Salesman tells the story of a man confronting failure in the success-driven society of America and shows the tragic route that eventually leads to his suicide. ...read more.

The Dream, as w***y perceives it, is still within grasp of the Lomans thus an ordinary job would not fulfil the true expectations w***y holds of either himself or Biff. Ironically, these job proposals are the one gate left open to w***y and his hopes of becoming 'great'. According to Biff, his friend, the 'anemic' Bernard, is not 'well liked'. However not 'well liked' he may be, Bernard, through hard work, has grown up to be an eminent lawyer. He appears to be proof enough of the "system's" effectiveness and affirms the proposition that success is achieved through persistent application of one's talents. Whilst everyone around w***y experiences success and wealth, the Loman's themselves struggle financially. The play romanticises the pioneering dream but never makes it genuinely available to w***y and his family. w***y reveres success. He wants to be successful; to be "great", but his dream is never fulfilled. Indeed, he feels the only way he can actually fulfil his dream is to commit suicide so that his family may subsequently live off his life insurance. It seems w***y's dead brother, Ben, is the only member of the Loman family who has ever achieved something "great" when he proclaims, '-when I was seventeen I walked into the jungle, and when I was twenty-one I walked out. ...read more.

With everyone succeeding except w***y, Miller also suggests that there is far more success outside America. Indeed, there are nothing but wasted hopes and 'shattered dreams' to be found within the nation. And, in one last vain effort, w***y attempts to 'grow' something for his family in his buying of seeds to plant in the garden. Nevertheless, even w***y has come to realise that his life is a failure when he declares, "Oh, I'd better hurry-Nothing's planted. I don't have a thing in the ground." I think that w***y made this comment because he had never sewn anything in his life that was worthwhile, I believe that he even thought that his own seeds, his children, did not grow into the men that he wanted them to be, so therefore his life is a waste of space in his "garden" Miller's intention in writing about the death of a salesman, a seemingly ordinary occurrence in twentieth-century society, was to express the playwright's own vision of American Society and the nature of individuality. Death of a Salesman is the failing America and the 'jagged edges of a shattered dream' but it also demonstrates Miller's belief that 'the "common man is as apt a subject for tragedy as kings are".6 1 Homework-online/Death of a salesman. 2 Craig. M. Garrison. 3 http://www.revision-notes.co.uk/revision/16.html 4 Craig M Garrison 5 Craig M Garrison 6 Tragedy and the Common Man ...read more.