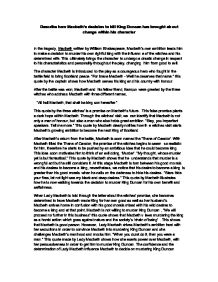 Describe how Macbeth's decision to kill King Duncan has brought about change within his character In the tragedy, Macbeth written by William Shakespeare, Macbeth's own ambition leads him to make a decision to murder his own rightful king with the influence of the witches and his determined wife. This ultimately brings the character to undergo a drastic change in respect to his characteristics and personality throughout the play, changing him from good to evil. The character Macbeth is introduced to the play as a courageous hero who fought in the battle field to bring Scotland peace. "For brave Macbeth- Well he deserves that name." this quote by the captain shows how Macbeth serves his king and his country with honour. After the battle was won, Macbeth and his fellow friend, Banquo were greeted by the three witches who address Macbeth with three different names, "All hail Macbeth, that shalt be king son hereafter." This quote by the three witches' is a promise on Macbeth's future. ...read more.

Macbeth arrives home in confusion with his good morals mixed with his wild desires to become a king and at that point, Macbeth is not willing to murder King Duncan, "We will proceed no further in this business" this quote shows that Macbeth views murdering the king as a horrid action which goes against nature and the society's 'chain of being'. This shows that Macbeth is good person. However, Lady Macbeth drives Macbeth's ambition hard with her seductions in order to convince Macbeth into murdering King Duncan and she challenges Macbeth's manhood and mocks him. "When you durst do it, then you were a man." This quote made by Lady Macbeth shows how she exerts power over Macbeth, with her persuasiveness in order to get him to murder King Duncan. The confidence and the determination of Lady Macbeth influence Macbeth to decide on murdering King Duncan without any hesitations. This is a turning point in Macbeth's characteristics, from here on we see Macbeth going downhill towards darkness and wickedness. ...read more.

Finally, the act of seeking the evil witches confirms that Macbeth is now an evil person. "I will tomorrow- And betimes I will - to the weird sisters." This quote made by Macbeth shows how Macbeth is changed into a character of wickedness who now seeks very dark evil. In conclusion, over the course of the play, Macbeth's ambitious decision to murder his own rightful king under the influence of the three witches as well as his wife changes him to a brave soldier with good morals into an evil and selfish man. Macbeth became too obsessed with ideas that someone or something will overthrow him as a king and this obsession contrasts to the beginning of the play, when Macbeth fought for Scotland to bring his country peace and freedom. This play had conveyed an idea that even a courageous man like Macbeth has cracks underneath his perfect exterior and can make wrong decisions. GRACE KIM 11LG ...read more.