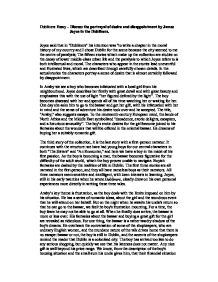 Dubliners Essay - Discuss the portrayal of desire and disappointment by James Joyce in the Dubliners. Joyce said that in "Dubliners" his intention was "to write a chapter in the moral history of my country and I chose Dublin for the scene because the city seemed to me the centre of paralysis; The fifteen stories which make up the collection are studies on the decay of lower middle-class urban life and the paralysis to which Joyce refers to is both intellectual and moral. The characters who appear in the stories lead uneventful and frustrated lives, which are described through carefully chosen details. In the actual stories the characters portray a sense of desire that is almost certainly followed by disappointment. In Araby we see a boy who becomes infatuated with a local girl from his neighbourhood. Joyce describes her firstly with great detail and with great beauty and emphasizes this with the use of light "her figured defined by the light". The boy becomes obsessed with her and spends all of his time watching her or waiting for her. One day she asks him to go to the bazaar and get her gift, with his infatuation with her in mind and the sense of adventure his desire took over and he accepted. The title, "Araby," also suggests escape. ...read more.

He overhears the conversation of some of the shopkeepers, who are ordinary English women, and the mundane nature of the talk drives home that there is no escape: bazaar or not, the boy is still in Dublin, and the accents of the shopkeepers remind the reader that Dublin is a colonized city. The boy has arrived too late to do any serious shopping, but quickly we see that his lateness does not matter. Any nice gift is well beyond his price range. We know, from the description of the boy's housing situation and the small sum his uncle gives him, that their financial situation is tight. Though his anticipation of the event has provided him with pleasant daydreams, reality is much harsher. He remains a prisoner of his modest means and his city. At the epiphany of Araby we see grave disappointment which we knew was going to happen by what was described leading up to the bazaar. Disappointment was shown by the description of the journey "deserted train", "ruinous houses" and by the delay that was imposed on the train. In Eveline from the opening lines we see her longing and disappointment "she sat at the window watching the evening invade the avenue". ...read more.

The weight of poverty and family responsibilities bear down on this young woman heavily; her financial situation is far worse than that of the three boy narrators of the previous stories. She is trapped in an ugly situation, responsible for her brothers and sisters and the aging father who abuses her. Paralysis is a common theme in Dubliners, and poor Eveline finds herself unable to move forward. She lacks the courage and strength to make that leap that will free her of her oppressive situation. She's too scared to leave Ireland, and sees her lover as a possible source of danger: "All the seas of the world tumbled about her heart. Frank was drawing her into them: he would drown her" (34). But her paralysis will cost her. Instead of an uncertain but hopeful future, she faces a certain and dismal future that may well repeat her mother's sad life story but her face at the end is not one of disappointment and shows does not show no desire but shows her duty to her family and to what her mother said. Her sense of what is right and what she actually feels is blocked by this. This is the moment of epiphany and were everything is reversed and "amid the seas she sent a cry of anguish" and she couldn't go but she knew what she faced if she stayed. By Karl Green 5M ...read more.