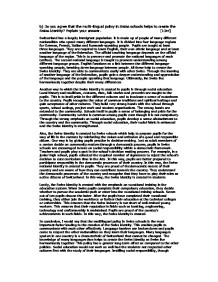 Do you agree that the multi-lingual policy in Swiss schools helps to create the Swiss identity? Explain your answer.

b) Do you agree that the multi-lingual policy in Swiss schools helps to create the Swiss identity? Explain your answer. [13m] Switzerland has a largely immigrant population. It is made up of people of many different nationalities who speak many different languages. It is divided into four language regions for German, French, Italian and Romansh-speaking people. Pupils are taught at least three languages. They are required to learn English, their own ethnic language and at least another language of the federation. The official teaching language depends on the official language of the region. This is to preserve and promote the national languages of each territory. The second national language is taught to promote understanding among different language groups. English functions as a link between the different language-speaking people, breaking down language between people. All these help to create the Swiss identity. ...read more.

Through the strong emphasis on social education, pupils develop a sense of attachment to the country and the community. Through social education, their social fabric is enhanced and the Swiss identity is strengthened. Also, the Swiss identity is created by Swiss schools which help to prepare pupils for the way of life in the cantons by reinforcing the values and attitudes of a good and responsible citizen. One way is by giving pupils practice in decision-making. Just as adult members of a canton decide on community matters through a democratic process, pupils in Swiss schools are encouraged to take on social responsibility within a democratic framework. Teachers and pupils play a part in the school's decision making process. For example, in a junior high school, pupils collected the required number of signatures to reject the school's decision to cute curriculum time in the Arts. ...read more.

In this way, the Swiss identity is created. In conclusion, I would say that the multilingual policy in Swiss schools is the most important factor leading to the creation of the Swiss identity. This enables pupils to communicate with each other effectively. Language barriers are broken down and pupils come to respect the other nationalities as they learn their languages. Many languages spoken in one country is a characteristic of Switzerland that cannot be changed. The knowledge of many languages thus helps to create the Swiss identity as Swiss live harmoniously together. This policy has a greater long-term effect as compared to the other policies. Social education would not work as well had the students not respected other cultures first with the study of their languages. Instilling social responsibility, though important, is not as important as having all the nationalities respect and understand each other. A Swiss identity can only be created if there is harmony in Switzerland. ...read more.