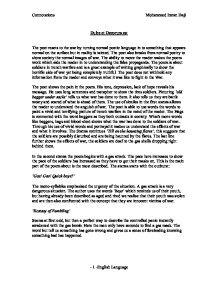 Dulce et Decorum est The poet reacts to the war by turning normal poetic language in to something that appears normal on the surface but in reality is tainted. The poet also breaks from normal poetry to show society the normal images of war. The ability to move the reader makes the poem work which aids the reader in to understanding the false propaganda. The poem is about soldiers in trench warfare and is a great example of writing graphically to show the horrific side of war yet being completely truthful. The poet does not withhold any information from the reader and conveys what it was like to fight in the War. The poet shows the pain in the poem. His tone, depression, lack of hope reveals his message. He uses long sentences and metaphor to show the tires soldiers. Picturing 'old beggar under sacks' tells us what war has done to them. It also tells us they are battle weary and scared of what is ahead of them. The use of similes in the first stanza allows the reader to understand the anguish of war. ...read more.

The next line 'and floundering like a man in fire of lime' describes the helplessness of the soldier. This also shows life is left to chance. The innocent soldier is floundering and has no control over what is happening to him. The word 'dim' on the next line not only sets up scene, giving it a gloomier and a eerie and also describes the chances of the boy to survive. The next line 'as under a green sea, I saw him drowning' moving on to the next stanza 'In all my dreams, before my helpless sight, He plunges at me, guttering, choking, drowning.' This helps the reader understand the feeling of being trapped by poisonous gas. The soldier in the poem literally cannot breathe due to the gas. "..Helpless sight..." emphasises how traumatised the poet felt whilst watching this disturbing incident it also describes the soldier was helpless, nothing could be done for him. The word 'plunges' shows the desperation of the soldier, 'guttering, choking, drowning' gives the reader a vivid image of the soldier dying in front of the narrator. ...read more.

Looking back on the previous line: 'Of vile incurable sores on innocent tongues.' The reader gets the idea that the soldiers are innocent. The word innocent explains exactly what they are. These soldiers were once the 'children ardent for some desperate glory.' 'Children' here is used as the same reason as 'boys', who were brainwashed in to sacrificing their lives. The innocent are willing to believe in the lie about the war, but the war was totally different first hand hence the anger towards those who propagated dying for your country in being noble. 'The old Lie' the poet users a capital 'L' in lie. This puts the war in perspective of being glorious and patriotic. The readers attention does not wonder during the poem because of the poets consistent imagery. By the end of the poem the reader can fully appreciate the irony between the truth of what happens at the Trenches and the lie being told at home. The whole poem is contradictory to what was being spread with 'Dulce et Decorum est.' (It is a sweet and glorious thing to die for your country.) ?? ?? ?? ?? Connotations Mohammed Imran Daji - 1 -English Language ...read more.