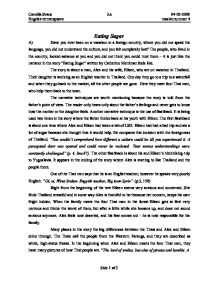 Eating Sugar A) Have you ever been on a vacation in a foreign country, where you did not speak the language, you did not understand the culture, and you felt completely lost? The people, who lived in the country, looked askance at you and you did not think you could trust them - it is just like the narrator in the story "Eating Sugar" written by Catherine Merriman feels like. The story is about a man, Alex and his wife, Eileen, who are on vacation in Thailand. Their daughter is working as an English teacher in Thailand. One day they go to a trip to a waterfall and when they go back to the market, all the other people are gone. Here they meet four Thai men, who help them back to the town. The narrative techniques are worth mentioning because the story is told from the father's point of view. The reader only hears only about the father's feelings and never gets to know how the mother or the daughter feels. ...read more.

The Thais call the people from the Western: Farangs, and they are described as white, high-status freaks. In the beginning when Alex and Eileen meets the four Thai men, they have many pictures of how Thai people are. "The land of smiles; but also of pirates and bandits. A poor country where palaces were roofed in gold. "Amazing Thailand""(side 3, p 76). Alex is very afraid of what the four men could think of doing to his wife and daughter and the fact that he can not protect them alone against four men. There comes a car to pick the Thai men up, and they offer the family a ride back, and the Father's view of Thai people changes. Suddenly he sees the beauty of the land and he comes to the terms that he has never seen anything more beautiful. Some of the problems the family experiences, are also pictured in the text "A small place" written of Jamaica Kincaid. This text just shows the problems from the natives' point of view. ...read more.

When did this happen, when did we get so scared of trusting foreign people? B) In The Story "Eating Sugar" the English couple complains about the fact that they can not talk to any of the people in Thailand because no one speak English. Not even the Police can talk English. In the forest they meet a Thai man, who is an English teacher at a school; but not even he talks English so it is understandable. Almost every country has it in their classes, however if the teaching is as poorly at every school as is it pictured in this story, is it a waste of resources. To get along in a big and international company you have to speak English. I think English is a very important language to know, but in the long run we have to make sure that it does not replace our own language. All the dialects are by now disappeared from the Danish language and it would be a shame if the same happens to the Danish language! ?? ?? ?? ?? Camilla Svane 3.a 04-05-2008 Engelsk terminspr�ve maskinnummer 4 Side 1 af 3 ...read more.