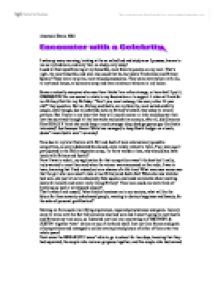 Encounter with a Celebrity.

Anastasia Hatzis 10S1 I wake up every morning, looking at the so called bed and study area I possess, known to me as my bedroom, and only that, no study, only sleep! I used to find myself staring at my beautiful, most favorite posters on my wall. That's right, the most beautiful, and who else could that be, but Justin Timberlake and Britney Spears! These were my prize, most valued possessions. They came everywhere with me, to my beach house, to summers camp and even miniature versions in my locker. Some or actually everyone who sees them thinks I am rather strange, or how shall I put it, OBSESSIVE! No one seems to relate to my fascination or to support it when all I ask for is a Britney Doll for my Birthday. "Don't you want makeup, like every other 16 year old?" they question. But no, Britney and Justin are my favorite, most suited celebrity couple, even though, due to unfaithful acts on Britney's behalf, they cease to remain partners. ...read more.

I set out time frames and goals of competitions and managed to collect every printed picture of either of them over two whole years! Next came the BREAKUP! I wasn't able to go to school for two days, knowing that they had separated, the couple who were so gorgeous together, and the couple who had earned a place on my wall for so long, the couple who had looked so in love! Extensive research and numerous enquiries developed into more heartache, when it was proved that Britney had infact cheated on Justin with one of her male dancers. I wasn't able to look at the poster of Britney for several weeks, and every time I would wake up in the morning I would turn around quickly, in just enough time to only catch a glimpse of her! Finally I came to the conclusion that Britney was human after all and had not intentionally meant to break Justin's heart, so I forgave her and once again set out on my quest to meet them. ...read more.

I interrupted their argument and introduced myself, explaining that I was the one who had won the competition to meet them. They both stared at me for less than ten second and then Britney told me to get lost and stop annoying them! I was emotionally ruined! I had spent my whole life, or as long as I could remember, dreaming of this moment and know it had passed in less than one minute. I was speechless, I just turned and ran away, ran as far as I could, and didn't stop till I collapsed. I ended up in the airport toilets crying and wishing I was back home. It was then that I realized that I had built up such a powerful image of them, without even knowing them, and now it had been crushed, but not only crushed, it had been ruined for ever and I found myself wondering why I had wasted so much of my time on them. They were high profile celebrities, of course they didn't care what I wanted, they had to much power, and with to much power came to much selfishness!!!!!!!! ...read more.