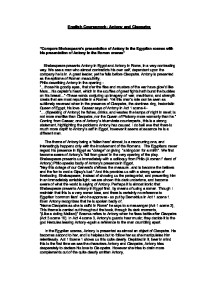 English Coursework- Antony and Cleopatra "Compare Shakespeare's presentation of Antony in the Egyptian scenes with his presentation of Antony in the Roman scenes" Shakespeare presents Antony in Egypt and Antony in Rome, in a very contrasting way. We see a man who almost contradicts his own self, dependant upon the company he is in. A great leader, yet he falls before Cleopatra. Antony is presented as the epitome of Roman masculinity, Philo describing Antony in the opening- "...those his goodly eyes, that o'er the files and musters of the war have glow'd like Mars...his captain's heart, which in the scuffles of great fights hath burst the buckles on his breast..."-These words conjuring up imagery of war, machismo, and strength. Ideals that are most reputable in a Roman. Yet this man's role can be seen as sublimely reversed when in the presence of Cleopatra, the domineering, hedonistic Queen of Egypt, his love. Caesar says of Antony in Act 1 scene 4- "... (Speaking of Antony) he fishes, drinks, and wastes the lamps of night in revel; is not more manlike than Cleopatra, nor the Queen of Ptolomy more womanly than he." Coming from Caesar, one of Antony's triumvirate counterparts, this is a strong statement, highlighting the problems Antony has caused. ...read more.

This is part of her response to Antony after he dismisses a Roman messenger. Shakespeare's presentation in this scene of Antony clearly leaves us in no doubt as to who is the dominant in this relationship. In Act 2 scene 4, despite his decision to make amends with Caesar and marry Caesar's sister Octavia, Antony decides to leave Rome for Egypt once again. To where his "pleasure lies". All this because a soothsayer tells him luck is on Caesar's side; Antony's luck does not bode well. Act 3 scene 10 Antony flees battle after Cleopatra, again another totally uncharacteristic manoeuvre, which furthers our impression of her hold upon the triumvirate. Antony knows she does too, "You did know how much you were my conqueror, and that my sword, made weak by my affection, would obey it on all cause." This is an out-an-out attack at Cleopatra, an accusation that she deliberately manipulated him. Previously in scene 7 he ignores his fellow soldier's advice and lets Cleopatra fight in the battle. Again all this clearly showing the control she has over Antony. Although in Act 1 scene 3 Antony stands his ground and does leave Egypt, despite Cleopatra's best efforts. However I think Enobarbus sums up best, when Mecenas says, "Now Antony must leave her utterly." Enobarbus says, "Never he will not." ...read more.

This quote clearly depicting Egypt as the land to which Antony yearns for. The land he can escape to. It is through his Egyptian scenes, and the way in which Shakespeare presents him to us, that we see Antony as a character of great depth. Though earlier I made the point of Antony being firmly under Cleopatra's control, in scenes such as Act 1 scene 3 Antony keeps his cool, stands his ground and ultimately leaves Egypt. Throughout the scene Cleopatra seems to be the dominant, however but by being recessive, Antony very subtly expresses his control in their relationship. It is through the Egyptian presentation that Antony becomes a much deeper character than his Roman counter-parts. They all are presented as men with a singular occupation, to which they remain. They seem almost two-dimensional in comparison to Antony- he is a triumvirate, lover to the Queen of Egypt, head of a mighty army. He switches between madly loving Cleopatra, and despising her existence. Antony is at conflict. In contrast, none of the Roman characters are. Shakespeare presents Antony, very much as a man at conflict. He is at conflict with himself, and the battles are fought inside him, his very self is in turmoil. Shakespeare makes very clear throughout the play, that Antony's stay in Egypt and relationship is somewhat controversial. Antony's conflict comes about from two opposite aspects of Antony's character, love and duty. ...read more.