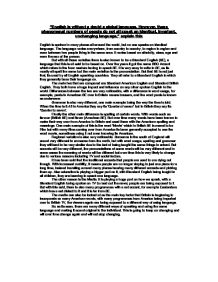 &quot;English is without a doubt a global language. However, these phenomenal numbers of people do not all speak an identical, invariant, unchanging language,&quot; explain this.

"English is without a doubt a global language. However, these phenomenal numbers of people do not all speak an identical, invariant, unchanging language," explain this English is spoken in many places all around the world, but no one speaks an identical language. The language varies everywhere, from country to country, to region to region and even between two people living in the same area. It varies based on ethnicity, class, age and even the sex of the person. But with all these varieties there is also known to be a Standard English (SE), a language that this is all said to be based on. Over the years it got the name BBC Accent which refers to the New readers having to speak SE. ...read more.

Finally the other main difference is spelling of certain words. With words such as flavour (British SE) and flavor (American SE). But over time many words have been known to make their way over from America to Britain and used there with the American spelling and meanings. One main example of this is the word 'Movie' which in British SE is meant to be Film but with many films coming over from America its been generally accepted to use the word movie, sometimes using it not even knowing its American. Regional variation is also very noticeable. Someone in the south of England will sound very different to someone from the north, but with word usage, spelling and grammar they will tend to be very similar due to the fact of being taught the same things in school. ...read more.

The other reason is the Media. It is playing a huge part on how we speak, with a Standard English being spoken on TV to read out the news; people are being exposed to it. But with this said, there is also many programmes with a set accent, for example Eastenders which has a set dialect to it and it is far from SE. The media can also be looked at as the main key factor that Britain is beginning to incorporate so many American words, with many programmes from America being imported over to British TV, the viewers again are being exposed to a different way of using language. So as its seen, there are many different ways of speaking and using the same language and making it sound original to the individual. This is going to keep on changing and will over time change again and will not stop changing. ...read more.