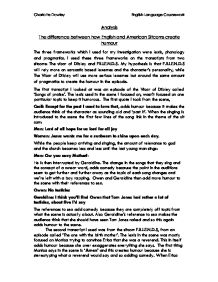 Analysis The difference between how English and American Sitcoms create humour The three frameworks which I used for my investigation were lexis, phonology and pragmatics. I used these three frameworks on the transcripts from two sitcoms: The vicar of Dibley and FR.I.E.N.D.S. My hypothesis is that F.R.I.E.N.D.S will rely more on sarcastic based lexemes and the character's personality, while The Vicar of Dibley will use more serious lexemes but around the same amount of pragmatics to create the humour in the episode. The first transcript I looked at was an episode of the Vicar of Dibley called 'Songs of praise'. The lexis used in the scene I focused on, wasn't focused on one particular topic to keep it humorous. The first quote I took from the scene, Cecil: Except for the past I used to love that, adds humour because it makes the audience think of the character as sounding old and 'past it'. When the singing is introduced to the scene the first few lines of the song link in the theme of the sit com: Man: Lord of all hope for us lord for all joy Woman: Jesus wants me for a sunbeam to shine upon each day. ...read more.

repeats the word 'flock' seven times in her next sentence, which is comic because it shows how much she is willing to lie to get the baby she really wants. When Erica finally tells Chandler and Monica that she chooses them to be the adoptive parents, Monica replies with: 'Monica: You are so going to heaven!' This creates humour because she is over emphasising her pretend role as a reverend, again showing how desperate she is to have this baby. Chandler's lexis is used in the scene to mostly have comic effect, such as after Monica talks about the bible he replies with 'Yeah (.) Wow' which emphasis's his disbelief of how Monica can act, so believably like a reverend, and so it is humours and extracts a laugh from the audience. Pragmatics Unlike 'The Vicar of Dibley', F.R.I.E.N.D.S is contextual humour. The episode, 'The one with the birth mother', shows Monica and Chandlers longing for a baby, however it shows this serious issue through humour. Pragmatics are used in this transcript to show off the characters and the mistake that the agency have made. The use of Pragmatics are used through Monica to imply that she's willing to do anything to get the baby. ...read more.

Chandler: Not for me it doesn't And Chandler: You should be (.) you're really on top of stuff Both use satire to convey humour through Chandler's criticism. The use of pauses also create humour in the scene, because they are used to show Monica's desperation for a child. Monica: no no no my flock (.) my flock is good (.) my flock pretty much takes care of themselves by this point (.) good flock (.) flock flock flock The use of four pauses creates humour because it conveys how hard Monica is trying to convince Erica that she is a reverend. In the Vicar of Dibley transcript, the use of phonology and pragmatics are merged together through Geraldine. Geraldine: Yes it was fun wasn't it? And Geraldine: Yes thank you Both said sarcastically to create humour through Geraldine's character. However when Geraldine says 'yes thank you' there is also a tone of annoyance which creates humour, because the audience can tell she is getting fed up. The main use of phonology in this transcript is the singing. The sitcom have deliberately used bad singers to create humour in the scenes, this is because it makes the singer look stupid and so the audience will laugh at them. Word count: 1228 ?? ?? ?? ?? Charlotte Dowley English Language Coursework ...read more.

This is an interesting essay and the writer clearly understands the various ways humour is created in the two sitcoms. Accurate use of technical vocabulary throughout and statements are supported by quotes. Conclusion needed.