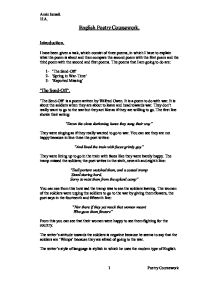 English Poetry Coursework. Introduction. I have been given a task, which consist of three poems, in which I have to explain what the poem is about and then compare the second poem with the first poem and the third poem with the second and first poems. The poems that I am going to do are: 1- 'The Send-Off' 2- 'Spring in War-Time' 3- 'Reported Missing' 'The Send-Off'. 'The Send-Off' is a poem written by Wilfred Owen. It is a poem to do with war. It is about the soldiers when they are about to leave and head towards war. They don't really want to go to the war but they act like as if they are willing to go. The first line shows their acting: "Down the close darkening lanes they sang their way" They were singing as if they really wanted to go to war. You can see they are not happy because in line three the poet writes: "And lined the train with faces grimly gay" They were lining up to go in the train with faces like they were barely happy. ...read more.

The poem consists of eight stanzas and most of the poem rhymes. 'Spring in War-Time'. The 'Spring in War-Time' is a poem written by Edith Nesbit. It is a poem to do with war. It is about how the season of spring was in the war. The main difference between this poem and the first one is that this poem concentrates more on the season while the first poem concentrates on the soldiers. The poet says: "Every bird has heart to sing" By this the poet means that everything was nice and peaceful and the birds were singing. The attitude of the writer is a bit of both, positive and negative. Positive because she says the birds were happily singing and that is a good thing meaning a sign of peace, but negative because she misses her loved one who is in the war, she says in the first four lines: "Now the sprinkled blackthorn snow Lies along the lovers' lane Where last year we used to go- Where we shall not go again" What she means by these four lines ...read more.

The poet is positively sure she will find her loved one, because she says in line seven: "I laugh! I laugh!- For you will come again- By this the poet means, that she is calm and is pretty sure her loved one will return. She says in the last line: "Being so very sure you are not dead" From this the reader can easily understand that she is very sure that her loved one is not dead. The writer's attitude is positive throughout the whole poem because she is sure about everything that is going to happen. The writer uses some hard words, but it is easy to understand, compared to the 'Spring in War-Time'. The poem is quite short and is all in one stanza and does rhyme a lot. Conclusion. Throughout the coursework I did what I said in the introduction and found out how poets use types of languages, grammar, their attitude, what the poem is about and I was also quoting from the book. ?? ?? ?? ?? Amin Ismail. 11A. 1 Poetry Coursework ...read more.