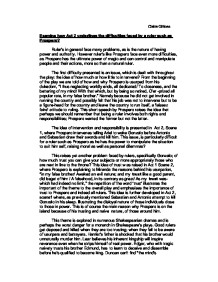 Examine how Act 2 underlines the difficulties faced by a ruler such as Prospero?

Claire Gittoes Examine how Act 2 underlines the difficulties faced by a ruler such as Prospero? Ruler's in general face many problems, as is the nature of having power and authority. However ruler's like Prospero face even more difficulties, as Prospero has the ultimate power of magic and can control and manipulate people and their actions, more so than a natural ruler. The first difficulty presented is an issue, which is dealt with throughout the play: the idea of how much or how little to intervene? From the beginning of the play we are told of how and why Prospero is usurped from his dukedom, "I thus neglecting worldly ends, all dedicated/ To closeness, and the bettering of my mind/ With that which, but by being so retired, O'er-prized all popular rate, in my false brother." Namely because he did not get involved in running the country and possibly felt that his job was not to intervene but to be a figure-head for the country and leave the country to run itself, a 'laissez faire' attitude to ruling. This short speech by Prospero raises the idea that perhaps we should remember that being a ruler involves both rights and responsibilities; Prospero wanted the former but not the latter. ...read more.

Edgar, who with tragic naivety trusts his brother Edmund, has to learn to deceive and dissemble before he's qualified to become king. Duncan can't find "the mind's construction in the face", so he's killed by a traitor with a false face. That's why Malcolm, before he becomes king, has to demonstrate his ability to lie to Macduff, to test whether he's telling the truth. This closely relates to the difficulty of dealing with people who have a fixed nature. This idea is dealt with throughout the play and is a constant problem faced by the character of Prospero. How does a ruler relate to or try to understand, in order to deal with, those individuals who possess very little understanding of morals, remorse or learning from previous behaviour, that is to say, they lack the ability to change? There are many examples of this during the play. Antonio and Sebastian being the best example of characters with a fixed nature. They both attempt to kill Gonzalo in order to gain the dukedom and neither show any sign of guilt for their actions. They certainly have not learnt their lesson or shown any remorse for their previous behaviour in collaborating to usurp Prospero. ...read more.

This is seen when Caliban submits to Stephano and Trinculo, the two drunkards. Caliban proves Prospero's view of him, as a natural servant, to be true, when he immediately adopts Stephano as his new master upon Stephano's sudden appearance. Caliban, as a native, is seen as a "monster," and therefore a slave not only by Prospero, but by Trinculo and Stephano also. He submits for two reasons: first, they are an alternative to his current master and second, they have alcohol. Caliban gives his only power, knowledge of the island, as a pledge to his new masters. His hope is that by exchanging masters, he will be able to better his life. This continues the idea of trust and the problems faced by those ruler's such as Prospero who have slaves who have an inherit need to be incarcerated by a ruler, but unfortunately by any ruler at all and are therefore not faithful. In conclusion, Act 2 reveals the difficulties faced by ruler's such as Prospero, through cleverly interwoven narrative threads which are developed gradually throughout the play. This is especially true of the themes of trust and the fixed natures of characters, which both pose a problem for those in power. Prospero of course has the added dilemma of possessing supernatural powers which brings with it additional problems when placed in the role a ruler. ...read more.