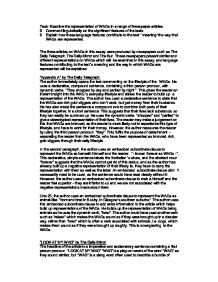 Examine the representation of WAGs in a range of Newspaper articles.

Task: Examine the representation of WAGs in a range of Newspaper articles. * Comment linguistically on the significant features of the texts * Explain how these language features contribute to the text' meaning/ the way that WAGs are represented. The three articles on WAGs in this essay were produced by newspapers such as The Daily Telegraph, The Daily Mirror and The Sun. These newspapers present similar and different representations on WAGs which will be examined in this essay, and language features contributing to the text's meaning and the way in which WAGs are represented will be explained. "Appendix A" by The Daily Telegraph. The author immediately opens the text commenting on the lifestyle of the WAGs. He uses a declarative, compound sentence, containing a third person pronoun, with dynamic verbs. "They shopped by day and partied by night". This gives the reader an instant insight into the WAG's everyday lifestyle and allows the reader to build up a representation of the WAGs. The author has used a declarative sentence to state that the WAGs are rich gold-diggers who don't work, but get money from their husbands. He has also made the sentence a compound one to combine both parts of their lifestyle together, in a short sentence. This suggests that their lives lack substance, so they can easily be summed up. He uses the dynamic verbs "shopped" and "partied" to give a stereotypical representation of their lives. ...read more.

so it reinforces the representation made of WAGs. "thanks largely to this newspaper" suggests that The Daily Mirror creates these representations rather than the author himself. The following sentence of the one above starts with a conjunction "and". "And now my wife Mindy...". The previous sentence ends will a full stop to avoid the use of a compound sentence, therefore separating WAGs and WOWs from the author's wife, Mindy. This places Mindy in a different position to the WAGs and WOWs, and detaches her from the negative representations made of them. This text reinforces all the representations made in Appendix A by separating everyday people from WAGs (and WOWs) by making everyday people superior and WAGs inferior and frowned upon for their lifestyles. Crouch Is So Abi With The New Girlfriend by The Sun This article creates a different representation of WAGs. It portrays them in a more positive light as being equal in society and not portrayed as inferior to the reader. The article also doesn't follow the same negative and degrading representations of The Daily Telegraph and The Daily Mirror. The article opens with a declarative sentence. "Peter's girlfriend...Abigail Clancy". The article doesn't introduce Abigail as a WAG like the previous articles. The article gives her a more respectable title of "girlfriend", rather than labelling her as a WAG like the previous articles. ...read more.

The Sun does not bind all WAGs together in one category. Instead, the article focuses on one "WAG" in particular, who is not once referred to as a WAG in the article - she is given the more respectable title of "girlfriend". The article shows that she does not follow the stereotypes of WAGs that the first two articles present. The article treats her as a respected individual who has her own goals and is not dependant on her boyfriend. Overall, language is a big factor when it comes to the articles creating representations. With negative representations, declarative statements are used to make negative judgements, pre-shaping the readers response. For example, in the first article: "They shopped by day and partied by night". This is a judgement made on the WAGs, rather than just stating their activities, because the article is implying they are rich gold-diggers, and the reader is likely to judge in the same way. On the other hand, The Sun uses declarative sentences to made positive statements, which allows the reader to make their own judgement. For example: "Abigail is set to appear in the new series of Britain's Next Top Model, starting on July 24 on Living TV". This statement allows the reader to make their own judgement. Some readers will interpret this as Abigail making her own path in life and not being independent on her boyfriend. Other, more critical readers, may represent this as Abigail being "into her looks" and going on a Model show on TV to show off, like other typical WAGs. ...read more.