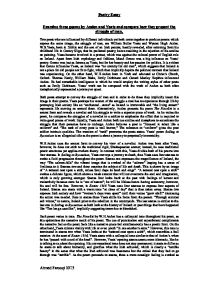 Examine three poems by Auden and Yeats and compare how they present the struggle of man.

Examine three poems by Auden and Yeats and compare how they present the struggle of man. Two poets who are influenced by different individuals yet both come together to produce poems which expose the same image, the struggle of man, are William Butler Yeats and Wystan Hugh Auden. W.B.Yeats, born in Dublin and the son of an Irish painter, hastily revealed, after returning from his childhood life in County Sligo, that he preferred poetry, hence resulting in the rejection of his studies on painting. Yeats became involved in a protest, which was against the cultural power of English rule on Ireland. Apart from Irish mythology and folklore, Maud Gonne was a big influence on Yeats' poetry. Gonne was just as famous as Yeats, but for her beauty and her passion for politics. It is evident that Gonne influences Yeats, as Ireland was "no country for old men", which suggests that Ireland is not a place for old people not fit to fight, which then implicitly depicts the political torment that Ireland was experiencing. On the other hand, W.H.Auden born in York and educated at Christ's Church, Oxford. Thomas Hardy, William Blake, Emily Dickinson and Gerard Manley Hopkins influenced Auden. He had remarkable intelligence in which he would employ the writing styles of other poets such as Emily Dickinson. Yeats' work can be compared with the work of Auden as both often metaphorically represented a journey or quest. ...read more.

On the other hand, Yeats mirrors vitality with life or even youth "In one another's arms." However, this tone is terminated in stanza two when Yeats looks at the "tattered coat upon a stick", which resembles a frail exterior. At the start of Easter 1916, Yeats starts with a colloquial tone similar to that of Auden's when he has "passed with a nod of the head". However, Yeats' opening stanza seems more idiomatic, like he is talking to us about the uprising. His conversational tone does not stay permanent; it starts to differ as he starts to talk about humanity, and glorifies what the Irish achieved, which is clearly a "terrible beauty" in the sense that what the Irish achieved was beauteous but the ordeal that they had to go through was "terrible". As the poem proceeds to stanza, three a more nostalgic feeling is evoked as Auden starts to look at Ireland before the uprising. The final stanza has a poignant tone as Auden starts to talk about death when "his own weak person", "Must suffer dully all the wrongs of man." Monosyllabic words are employed in Sailing to Byzantium, as they are sharp and direct, and when read, speed and rhythm is built up that then highlights the polysyllabic words. Yeats talks about the "dying generations", which stands out from the "birds in their trees". ...read more.

When this occurs, the responsibility the world must take is to love each corrupted soul, calling each by name "as a mother names her child when sleep has come". However, sleep is a metaphor for death and these men die in result of their inability to change among the changing events around them. The use of an alternate rhyme scheme links words together. Sailing to Byzantium is occupied with a wide variety of literary techniques. Two of the dominant themes of this poem are the desire for escape from the hardships of this world and the quest for immortality. These themes reflect the circumstances of Yeats' life that influenced the composition of the poem. Those personal experiences and Yeats' skilful use of words come together to emphasize the need, or at least desire, that many people have for escape and immortality. The process of dying in this poem is juxtaposed with delightful images evoked in the poem. Rhyme is used to assist the flow and lovability of the poem. The juxtaposition of the "old men" and "The young in one another's arms" highlights the transition from youth to old age, and man's struggle to come to terms with it. The rule of three and alliteration are cleverly blended in with the "Fish, flesh or fowl" as this represents all types of life. In conclusion, Sailing to Byzantium and Easter 1916 by W.B.Yeats and The Novelist by W.H.Auden, obvious and not so obvious similarities such as all three convey the struggle of man, and differences can be extracted. ...read more.