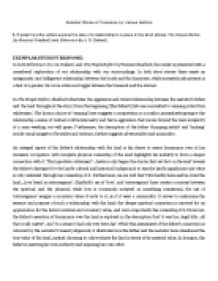 Explain how the writers explore the idea of a relationship to a place in the short stories The People Before (by Maurice Shadbolt) and Billennium (by J.G. Ballard).

Transfer-Encoding: chunked ﻿Selected Stories of Ourselves, by Various Authors 1. Explain how the writers explore the idea of a relationship to a place in the short stories The People Before (by Maurice Shadbolt) and Billennium (by J.G. Ballard). EXEMPLAR STUDENT RESPONSE: In both Billennium by J.G. Ballard, and The People Before by Maurice Shadbolt, the reader is presented with a considered exploration of our relationship with our surroundings. In both short stories there exists an antagonistic and belligerent relationship between the locale and the characters, while surreptitiously present is a hint of a greater, far more arduous struggle between the transient and the eternal. In The People Before, Shadbolt illustrates the aggressive and violent relationship between the narrator?s father and the land throughout the story. From the beginning ?[the father?s] life was committed to winning order from wilderness.? The diction choice of ?winning? here suggests a competition or a conflict, immediately giving to the relationship a sense of mutual confrontationality and fierce aggression that moves beyond the mere simplicity of a man weeding out wild grass. Furthemore, the description of the father ?chopping jerkily? and ?hacking? invoke visual imagery of brutality and violence, further suggests adversariality and inimicality. ...read more.

During the Depression, it is stated that ?...The grass looked much the same....the farm had lost its value.....? The description of the farm as ?look[ing] much the same as it had always looked? highlights how while the farm remains unchanged, there has been a shift in the father?s perception of the farm. His relationship with the farm is grounded in its monetary value and his sense of ownership but however the devaluation of the farm renders this worthless. Therefore, he finds that he is no longer able to exert dominance over the farm, because the sense of control and ownership that he had when the farm was successful and turned out as he wanted is now undermined. In contrast, Jim, who is appreciative of the farm and its background on a deeper level, is able to retain his connection to it. At the end of the story, the metaphor of ?...the long distance runner....to victory?, and ?.... robbed of something which was rightfully mine? is a parallel of the father?s own pursuit of ?..winning order from the wilderness?, and ownership of the land. Shadbolt highlights how it is because Jim avoids the conflict that the father and the narrator devoted themselves to, and instead gain a wholesome appreciation for the land?s innate characteristics, that he is able to maintain a meaningful connection. ...read more.

Here ?wandering? is juxtaposed with the the vocabulary of ?jostling? and ?shuffling?, highlighting the room?s vacuosity. Similarly, ?stretching? and ?grasping? are utilised here in order to create visual imagery of empty space. Therefore, Ward?s relationship with the room is directly set up in opposition to his relationship with the city. However, this defiance is short-lived, and gradually falls into place as another insignificant part of an infinite cycle. As more people arrive, the room becomes more and more reflective of the outside world. ?...stretched back on his narrow bed, trying not to bang his head on his shelving? is indicative of how the situation has returned to the status quo; again the language here suggests extremely restricted movement, with no sense of empty space The room has become exactly like the rest of the city, and Ward has been overcome by the greater social mechanism. In both Billennium and The People Before, the protagonists are locked in a struggle with their surroundings, and both have fleeting moments of apparent triumph. However, they are inevitably defeated by it, as its permanence becomes apparent. Perhaps both Ballard and Shadbolt, through their exploration of our relationships with our locale, are remarking upon the existence of these fundamental and primal forces; those that cannot be undermined but yet are constantly confronted and challenged by the us, the transient. ...read more.