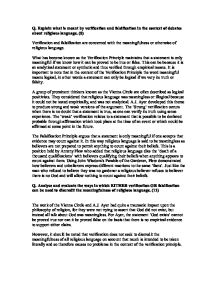 Explain what is meant by verification and falsification in the context of debates about religious language.

Q. Explain what is meant by verification and falsification in the context of debates about religious language. (8) Verification and falsification are concerned with the meaningfulness or otherwise of religious language. What has become known as the Verification Principle maintains that a statement is only meaningful if we know how it can be proved to be true or false. This can be because it is an analytical statement or synthetic and thus verified through empirical means. It is important to note that in the context of the Verification Principle the word meaningful means logical, in other words a statement can only be logical if we very its truth or falsity. A group of prominent thinkers known as the Vienna Circle are often described as logical positivists. They considered that religious language was meaningless or illogical because it could not be tested empirically, and was not analytical. A.J. Ayer developed this theme to produce strong and weak versions of the argument. ...read more.

Q. Analyse and evaluate the ways in which EITHER verification OR falsification can be used to discredit the meaningfulness of religious language. (12) The work of the Vienna Circle and A.J. Ayer had quite a traumatic impact upon the philosophy of religion, for they were not trying to assert that God did not exist, but instead all talk about God was meaningless. For Ayer, the statement 'God exists' cannot be proved true nor can it be proved false on the basis that there is no empirical evidence to support either claim. However, it should be noted that verification does not seek to discredit the meaningfulness of all religious language on account that much is intended to be taken literally and so therefore causes no problems in the context of the verification principle. For instance the claims that some priests wear black robes and Muslims do not drink alcohol can be shown to be true by observation or consultation with Muslim writings respectively. ...read more.

It is not analytical nor is there any evidence that can support it and so by its own arguments is therefore meaningless. Although, in response to this challenge logical positivists point out that the verification principle is not making a factual claim but simply a recommendation for the way in which words should be understood. This would seem to defeat the criticism as it is only logical to accept that in order to come to a conclusion one has to have a process for doing so, in this case the process is verification. In many ways, the arguments of the logical positivists seem unable to convincingly discredit the meaningfulness of religious language. Verification has not so much been refuted, but bypassed. Towards the middle of the twentieth century, especially under the developments of Wittgenstein's work, there was a growing recognition that giving a literal representation of the world was a small part of the task of language, and that its many other functions such as giving commands, expressing emotions and creating symbolic images required a very different approach. ...read more.