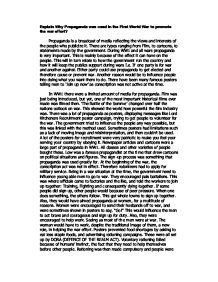 Explain Why Propaganda was used in the First World War to promote the war effort?

Explain Why Propaganda was used in the First World War to promote the war effort? Propaganda is a broadcast of media reflecting the views and interests of the people who publicize it. There are types ranging from Film, to cartoons, to statements made by the government. During WW1 and all wars propaganda is very important. This is mainly because of the effect it can have on the people. This will in turn relate to how the government run the country and how it will keep the publics support during wars I.e. If one party is for war and another against. Either party could use propaganda to get elected and therefore cause or prevent war. Another reason would be to influence people into doing what you want them to do. There have been many famous posters telling men to 'Join up now' as conscription was not active at the time. In WW1 there were a limited amount of media for propaganda. Film was just being introduced, but yet, one of the most important historical films ever made was filmed then. 'The Battle of the Somme' changed over half the nations outlook on war. This showed the world how powerful the film industry was. There was a lot of propaganda as posters, displaying messages like Lord Kitcheners Recruitment poster campaign, trying to get people to volunteer for the war. ...read more.

As the war went on, the image of the Germans grew worse. False stories were spread about them and this got the public to hate them even more. This was an ingenious method of getting people to sign up. Actual 'hate' for the enemy. This grew because of the danger of invasion. The people at home didn't want the false stories coming over to Britain and it happening to the British citizens. This made the factory workers work harder and produce more ammunition and supplies for the soldiers. This kept the workers minds fixed on a good cause that they were fighting for instead of being led astray to question the war. How effective were the methods of Propaganda used in the First World War in winning support for the war effort? Propaganda in WW1 tried to get people in support of the war. There were many different people whom, in different ways could help the war effort. First of all soldiers were required for fighting. These needed to be recruited. Women were required to work possibly on the land army to provide foods seeing as imports were being destroyed by German Submarines throughout the war. Women had to do this even though there was still some prejudice there (at some places there were whole factories of women) ...read more.

He was given medical treatment by the government and was forced to withdraw this statement. As the war progressed, Propaganda became harder to use effectively. This was for a number of reasons. It had reached its technological limit at the time and they couldn't push it any further. A cartoon was a cartoon and a poster was a poster. People get used to things the see often. Propaganda was one of these. At the end of the war, the people could tell when propaganda is being sued, and it might get to the stage where they didn't believe the government at all. Propaganda had many other different type of limitations, the emotional limitations also. Anything could provide the substances to urge somebody to do something. However they could not actually push you to do it. If people have a strong enough will then they won't be involved. No matter what you do there is always a minority group that opposes you. It would get to such an extreme stage where it would just become stupid and nobody would take any notice of it whatsoever and eventually backfire and become something people could target against you. These problems began to become recognised near the end of the war. It was limited how much of the information the government could hold back and there think of propaganda that made the best of the truth rather than covering it up. ...read more.