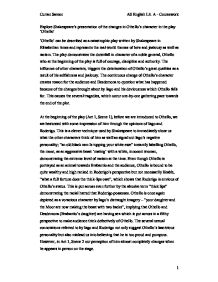 Explore Shakespeare's presentation of the changes in Othello's character in the play 'Othello' 'Othello' can be described as a catastrophic play written by Shakespeare in Elizabethan times and represents the real-world themes of love and jealousy as well as racism. The play demonstrates the downfall in character of a noble general, Othello who at the beginning of the play is full of courage, discipline and authority. The influence of other characters, triggers the deterioration of Othello's great qualities as a result of his selfishness and jealousy. The continuous change of Othello's character creates reason for the audience and Desdemona to question what has happened because of the changes brought about by Iago and his deviousness which Othello falls for. This causes the several tragedies, which occur one-by-one gathering pace towards the end of the plot. At the beginning of the play (Act 1, Scene 1), before we are introduced to Othello, we are bestowed with some impression of him through the opinions of Iago and Roderigo. This is a clever technique used by Shakespeare to immediately show us what the other characters think of him as well as signal out Iago's negative personality; "an old black ram Is tupping your white ewe" instantly labelling Othello, the moor, as an aggressive beast 'mating' with a white, innocent woman, demonstrating the extreme level of racism at the time. ...read more.

The handkerchief is an important symbol between Othello and Desdemona in the play since it symbolises their commitment and Othello's passion for her, "To lose, or give't away were such perdition", also demonstrates the disastrous consequences and threat towards her if she loses it which proves to be the case. Iago sets up the handkerchief with Cassio and subsequently reintroduces the handkerchief by informing Othello that Cassio has it, "did I today see Cassio wipe his beard with". This is a clever form of language presented by Shakespeare as it encourages Othello to believe him, partly because the concept appears so realistic (using a handkerchief to wipe his beard seems like a task men would carry out back then). This consequently results in the mistrust Othello has in Desdemona, "O, blood, blood, blood!" portraying the violent nature through the repetition of 'blood', which Othello has now gained. Othello's mistrust in Desdemona produces a rapid fire of questions about the whereabouts of the handkerchief, which Desdemona knows she has lost. "Is't lost? Is't gone? Speak: is't out o'the'way?" This sudden eruption from Othello shows his high level of urgency for the finding of the handkerchief so that he can prove to himself that what Iago has said is true. ...read more.

This allows us, the audience, to have expected his death because Othello was a courageous character and it's better that he dies like this rather than living a regretful life. Also, Shakespeare ensures the audience can once again see the Othello that they once looked up to and this allows him to die with some dignity and justice, which is what we would have to see because Othello was considered as a hero at the start of the play. All of this once again puts him in favour of the Venetian people as well as the audience. At the beginning of the play, Shakespeare introduces Othello as a proud, modest and important figure to the audience; however the presentation of Othello begins to change through the play into more of a paranoid monster, full of jealousy and there are several key factors that rob him off these previous noble qualities. Shakespeare presents the changes through the language he uses and the action that he presents which allows the audience to recognise Othello's downfall. Iago's craftiness, the powerful meaning behind the handkerchief and the instability of Othello's mind transform the audience and characters' perception of the once, gracious Othello, which allow the changes to become more noticeable towards the ending of the play. ?? ?? ?? ?? Curran Sareen AS English Lit. A - Coursework 1 ...read more.