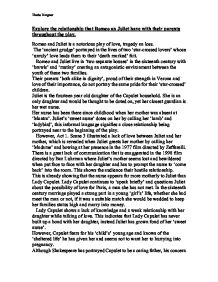 Romeo and Juliet is a notorious play of love, tragedy an loss.

The ‘ancient grudge’ portrayed in the lives of two ‘star-crossed lovers’ whose ‘unruly’ love leads them to their ‘death marked’ fait.

Romeo and Juliet live in ‘two separate houses’ in the sixteenth century with ‘brawls’ and ‘mutiny’ creating an antagonistic environment between the youth of these two families.

Their parents ‘both alike in dignity’, proud of their strength in Verona and love of their importance, do not portray the same pride for their ‘star-crossed’ children.

Juliet is the fourteen year old daughter of the Capulet household. She is an only daughter and would be thought to be doted on, yet her closest guardian is her wet nurse.

Her nurse has been there since childhood when her mother was absent at ‘Mantra’. Juliet’s ‘sweet nurse’ dotes on her by calling her ‘lamb’ and ‘ladybird’, this informal language signifies a close relationship being portrayed near to the beginning of the play.

However, Act 1. Scene 3 illustrated a lack of love between Juliet and her mother, which is revealed when Juliet greets her mother by calling her ‘Madame’ and bowing at her presence in the 1977 film directed by Zefferelli. There is a great lack of communication that is exaggerated in the 1998 film directed by Baz Luhrman where Juliet’s mother seems lost and bewildered when put face to face with her daughter and has to prompt the nurse to ‘come back’ into the room. This shows the audience their hostile relationship.

This is already showing that the nurse appears far more motherly to Juliet than Lady Capulet. Lady Capulet continues to ‘speak briefly’ and questions Juliet about the possibility of love for Paris, a man she has not met. In the sixteenth century marriage played a strong part in a young ‘girl’s’ life, whether she had meet the man or not, if it was a suitable match she would be wedded to keep her families status high and marry into money.

However, Capulet fears for his ‘child’s’ young age and knows of the ‘sheltered life’ he has given her and seems not to want her to hurrying into pregnancy.

Although Shakespeare has portrayed Capulet to be a caring father, his concern for Juliet leads also to the children , which were ‘swallowed’ up, leaving Juliet his lone heiress to the empire. Juliet does not fear of the concept of marriage as she refers to it as an ‘honour’ and wants consent from her parents as to whether she may or may not fall in love. This portrays a lesser knowledge about love proving her ‘sheltered life’. Nurse seems to know and appreciate a lot more about Juliet and both have gained a full trust for each other, this is shown when Juliet confines in the nurse about her secret marriage with Romeo.

Their relationship is shown in Act 3. Scene 5, in the 1977 Zefferelli film, When Juliet hides behind the nurse while in a ‘quarrel’ with her father. Zefferelli has used strong body language to determine the different relationship Capulet family.

In Act3. Scene 5, Capulet contradicts himself by ordering Juliet to marry Paris, whilst in Atc1 he tells Paris to wait because his ‘child is yet a stranger in the world’. This could be because of Tybalt’s abrupt death, causing the younger generation of the empire to decrease. Capulet is portrayed to be the leading role of the family is this scene. This is shown in the Zefferelli directed film, when Capulet hots Lady Capulet when she tells him that he is being irrational. The nurse also tries to calm Capulet, and when fails she takes sides with Capulet. Juliet becomes angry, betrayed and feels that she has no hope but to die.

However, Capulet still does not relent to Juliet’s incessant explanation of her ‘hate’ for marriage to Paris.

In Act 4. Scene 5, Capulet seems hasty towards his ‘child’s’ death. His language is calm and well structured. He uses descriptions of her ‘blood’ being ‘settled’ and relating her death to ‘night’. This seems more like a verse from one of Romeo’s sonnets than someone who’s lost his only daughter.

Capulet, while morning for his daughter’s death, he seems just as disappointed that Juliet has missed her marriage and rhetorically asks why the ‘murder’ of ‘our solemnity’ had to happen. Lady Capulet shows true disappear  for her daughter’s death by repeating, ‘she’s dead’ as if she cannot take the reality in. Her hurried and simplistic language portrays a troubled and caring mother, the opposite to Lord Capulet’s emotions for the death of his daughter.

Romeo’s relationship with his own parents have mixed similarities to the relationship Juliet shares with her parents.

As Juliet has her ‘good nurse’ Romeo has ‘Friar Lawrence’ to whom he refers to as ‘father’. This is because Friar Lawrence knows more about Romeo than Lord Montague, then Romeo’s real father. Lord and Lady Montague play a lesser role in the play of Romeo and Juliet. They are not involved with their son’s life and stay ‘away’. When Romeo is having troubles, as they cannot find out the reason of his ‘grivence’, for there is a lack of communication between them.

Shakespeare portrays Romeo’s parents as being scared of having a parental relationship with Romeo. Neither of them know how to approach him as they are fearful of being rejected by their emotional son. They worry for Romeo and ’pray’ he isn’t at any of the ‘frays’, which keep the two families at conflict with each other.  This portrays a concern and a sense of parental care for Romeo, yet they do not know whether he was at the fray or not… making the reader think that Romeo and his parents do not spend a great deal of time together. They only know that Romeo has been seen with ‘tears’ or has ‘locked’ himself in his room which is a common sign for a teenager in love. Yet his parents do not acknowledge that this is the case. Lord and Lady Montague do not pursue the affair of their troubled son, but leave it in the hands of Romeo’s good cousin Benvolio, who is determined to know of his ‘grievance’.

This is a strong reason why Friar Lawrence who thinks of Romeo as his pupil, plays such a significant part in Romeo’s life; he is close by to give constellation, to be a friend and to confess unjust sins. Romeo has a great deal of respect for Friar Lawrence, therefore his opinions and ideas are greatly considered by Romeo.

When Friar Lawrence thought that marrying Romeo and Juliet would ‘turn your households to rancour and pure love’, he was not thinking about Romeo’s true feelings for Juliet. Friar already has suspicions that Romeo did not love Rosaline and clearly states that ‘Young men’s love then lies, not truly in their hearts, but in their eyes’. They only good that Friar Lawrence sees in Romeo and Juliet’s relationship is the end of the two households feud.

When Romeo was in need of help after he has killed Tybalt, The Friar uses his unwavering optimism to make the best of the situation and vows to stay in contact with Romeo once he has been banished, showing that Friar Lawrence is looking out for Romeo’s best interest and wants to help him stay optimistic.

Both Romeo and Juliet do not confine with their parents, and they know that their love will not end the family feud. In sixteenth century Verona, a child’s duty to their parents was more than just giving respect. Parents would be in full charge of their children, and the father would overpower any argument. This is shown in Act 3. Scene 5 when Juliet is forced to marry someone she does not love.

In conclusion, the distant relationships between Romeo and Juliet and their parents lead them to seek other parental care. Friar Lawrence and the nurse both cared for Romeo and Juliet’s well being and helped them whenever they could. This lead, unfortunately, to the unfortunate death of the ‘star-crossed lovers’. I believe that Shakespeare did not want his audience to feel that the families were to blame for their painful

deaths. Many people have assumed that fait have played a powerful part in this play.

The deaths of Romeo and Juliet taught both of the parents  that life is too precious to live in a state of fear towards their enemy and especially towards their children.