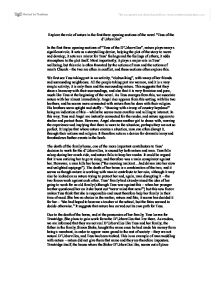 Explore the role of nature in the first three sections of the novel &quot;Tess of the d'Urbervilles&quot;

Explore the role of nature in the first three opening sections of the novel "Tess of the d'Urbevilles" In the first three opening sections of "Tess of the D'Urbervilles", nature plays many a significant role. It acts as a storytelling device, helping the plot of the story to move and develop; it acts as a mirror for Tess' feelings and the feelings of others; it adds atmosphere to the plot itself. Most importantly, it plays a major role in Tess' wellbeing, but this role is often thwarted by the actions of man and the actions of man's Church - the two are often in conflict, and these sections often explore this. We first see Tess taking part in an activity, "clubwalking", with many of her friends and surrounding neighbours. All the people taking part are women, and it is a very simple activity; it is only them and the surrounding nature. This suggests that they share a harmony with their surroundings, and also that it is very feminine and pure, much like Tess at the beginning of the novel. As Tess emerges from this, we associate nature with her almost immediately. Angel also appears from this setting, with his two brothers, and he seems more connected with nature than he does with their religion. His brothers seem uptight and stuffy - "dancing with a troop of country hoydens!" being an indication of this - whilst he seems more carefree and willing to interact. ...read more.

In this way, nature unwittingly works against Tess; by making her "appear more of a woman than she already was", it has caused Alec to be immensely attracted to her. However, during the cart ride from her family home to his, when he has attempted to kiss her and she has dismounted under the pretences of saving her hat, he tries to use nature against her by hemming her in with his cart against the fence. She, however, uses nature to save her and talks to him "from the top of the hedge into which she had scrambled" - nature assists her here. Just before Tess' r**e, the descriptions of wood are dark and unforgiving, with "webs of vapour" forming "veils against the trees". Nature shows its darker side, and indicates what is about to happen. What happens to Tess, however, is a vital part of Nature - perhaps nature assumes it is helping her in this way. It could be argued that nature here is working against Tess to set the next events in motion, or that nature is giving her a form of gift - s*x and pregnancy is widely regarded as nature's highest privelege. Human religion and attitudes, however, view it as a sin. The Church is in conflict with nature's ideas here that these acts are a vital part of life and therefore later outcasts Tess - the slogans painted on the fences around Marlott such as the beginning of "thou shalt not commit adultery" emphasise this in our minds. ...read more.

Tess' mouth, by contrast, is described firstly as a "mobile peony mouth"; like her, it is full and beautiful, and also everchanging. Nature presents Tess to Angel as a "fresh and virginal daughter of Nature" -although her past contradicts this ideal, Angel regards her image as perfect in every way. Nature could be seen as tricking him or trying to make amends and improve Tess' life. However, with the latter, the Church seems to oppose these ideas, and this is the cause of her heartache - man's inability to work with nature. In the romance of Angel Clare and Tess, nature tries to help them come together, with romantic settings such as a "violet and pink dawn". There is the incident with the butter tasting like garlic, forcing Angel and Tess to work together on the mead, and the butter not churning properly (which, according to the dairyman, happens only when love is affecting it, although the story he tells is far more similar to that of Tess and Alec than that of Tess and Angel.) There is, too, the rising rain before church that seems to force them to come together, and although Angel has to carry "Three Leahs to get one Rachel", he feels as though the trial was worth it for a moment with Tess. However, when they finally embrace while Tess is milking, the cow reacts unfavourably - perhaps nature has realised what the consequences of its actions may be and is therefore trying to stop the romance. In this way, nature still tries to look out for Tess - it is very much a mother figure to her. ...read more.

A sustained focus on nature, with topic questions clearly directing the reader through the essay. The writer never strays from the question at hand, which shows a clear level of understanding as to what the question was asking. The introduction ...

A sustained focus on nature, with topic questions clearly directing the reader through the essay. The writer never strays from the question at hand, which shows a clear level of understanding as to what the question was asking. The introduction explicitly shows the direction of the essay, though this is not backed up by the conclusion, of which there is none. It is vital to include a conclusion to round up, summarise and interpret points as a whole. Throughout, however, the role of nature is explored with little deviation from the set question.

The writer methodically and seemingly chronologically works through the first three sections, which is good as it makes the essay structurally clear, and throughout makes some discerning points and analyses them effectively. Where they quote, these quotes are fairly well analysed, such as Ã¢â‚¬Å“the descriptions of wood are dark and unforgiving, with Ã¢â‚¬Å“webs of vapourÃ¢â‚¬Â forming Ã¢â‚¬Å“veils against the treesÃ¢â‚¬Â Ã¢â‚¬Â. The writer ascribes the adjectives Ã¢â‚¬Å“dark and unforgivingÃ¢â‚¬Â to the quotes, thereby showing a reader's response to the setting Hardy lays out. However, there are few quotes within the essay and these rarely lead on to evaluation. Quoting is vital for higher band marks as the writer must show that points aren't just plucked from thin air, but driven and supported by evidence from the text Ã¢â‚¬â€œ points should be quote-driven to enhance this. An example of where analysis and evaluation could have been significantly extended is where they quote the word Ã¢â‚¬Å“assimilatedÃ¢â‚¬Â. The distinct semantic field here of machinery and capital in the context of writing about women could lead on to considerations of the role of women and feminist readings, or increased technology in farming, and thus nature, and discuss this in terms of the historical context (ie the Industrial Revolution). Alternative interpretations are essential for a higher band mark Ã¢â‚¬â€œ they show the examiner that you have considered a range meanings as what you think it means.
Paragraph 5 is a good example of where the writer has evaluated the dual role of nature, considering it as both an assistance and a hindrance. This does not come out in other sections of the essay, where the writer focuses too much on retelling the story. This will score few or no marks in an exam or coursework as it doesn't display any level of understanding of the text, just that the writer knows what occurs.

Spelling and grammar is generally good. Sentences are often complex and there is a range of vocabulary used. The writer makes links to other Hardy novels, such as Far From The Madding Crowd; such intertextuality meets expectations for written work at A Level and shows a degree of wider reading. There is very little technical vocabulary and no reference to form or structure. For example, the title specifies the first three sections Ã¢â‚¬â€œ in a conclusion they could have considered how important the opening sections are in shaping the rest of the novel and how they project on the rest of the text.