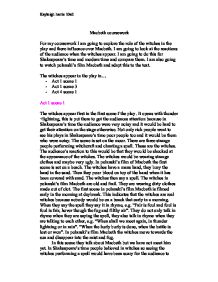 Macbeth coursework For my coursework I am going to explore the role of the witches in the play and there influence over Macbeth. I am going to look at the reactions of the audience when the witches appear. I am going to do this for Shakespeare's time and modern time and compare them. I am also going to watch polanski's film Macbeth and adapt this to the text. The witches appear in the play in... - Act 1 scene 1 - Act 1 scene 3 - Act 4 scene 1 Act 1 scene 1 The witches appear first in the first scene f the play. It opens with thunder +lightning, this is put there to get the audiences attention because in Shakespeare's time the audience were very noisy and it would be hard to get their attention on the stage otherwise. Not only rich people went to see his plays in Shakespeare's time poor people too and it would be them who were noisy. The scene is set on the moor. There are three strange people performing witchcraft and chanting a spell. These are the witches. The audience's reaction to this would be that they would be shocked at the appearance of the witches. The witches would be wearing strange clothes and maybe very ugly. In polanski's film of Macbeth the first scene is set on a beach. ...read more.

This means that when he is king he will be happy because he is the king but not as happy as he would be without the crown. The witches then go into a cave and leave Macbeth and banquo on the moor. This scene is dramatic because it starts with thunder and is set on the moor. They chant and rhyme when they are talking to Macbeth and banquo. Before Macbeth and banquo arrive the witches talk about killing swine and plotting to send a storm to a sailor. These are very strange subjects to be talking about. They also talk about controlling the weather, witch we think is impossible. The other thing that is strange is that the witches know that Macbeth is coming before they actually see him. Act 4 Scene 1 At the beginning of this scene there is thunder and Macbeth arrives on the moor. He has come here because he is looking for the witches, to see what next is going to happen in his life and how to protect the crown from others so he can keep it. He sees a cave and goes inside. The witches are there. They are brewing a potion and they are adding horrific things into the cauldron, e.g. "a toad that under a cold stone, days and nights hast thirty-one. ...read more.

It is misty so this adds to the effect of the set. The witches talk to Macbeth. When they have finished one of the witches shows her backside to Macbeth and banquo I think that this is saying "get lost" to macbeth and banquo. I don't think that this appropriate and does not make the effect of the scene any better. Act 3 scene 1 Polanski deals with this scene well. In the beginning of this scene there is strange music that is not in tune. It is also raining on the moor this adds to the affect of the scene. A witch pulls Macbeth into the cave. When he gets in he sees that there are loads of witches in the cave and they are all naked. They give Macbeth the potion and he hallucinates and sees 3 apparitions. At the end of them he sees the spirit of banquo and gets his sword and goes for banquo. There is a crash and it smashes like a mirror. He then wakes up in the cave. The witches have gone and it is raining on Macbeth. Conclusion - His wife - His piece of mind - Respect and good opinions - Loyal supporters - Friends- macduff and banquo etc - The crown and everything that comes with it At the end of the day Macbeth has lost more than he has gained. Lost gained ?? ?? ?? ?? Kayleigh harris 10a2 ...read more.