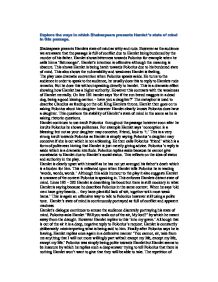 Explore the ways in which Shakespeare presents Hamlets state of mind in this passage.

Explore the ways in which Shakespeare presents Hamlet's state of mind in this passage. Shakespeare presents Hamlets state of mind as witty and rude. However as the audience we are aware that the passage is full of conflict due to Hamlet being burdened by the murder of his father. Hamlet shows bitterness towards Polonius for example when he calls him a 'fishmonger'. Hamlet's intention is offensive although the meaning is obscure. This shows Hamlet is being harsh towards Polonius due to his burdened state of mind. This also shows the vulnerability and weakness Hamlet is feeling. The play uses dramatic convention when Polonius speaks aside. He turns to the audience in order to speak to the audience, he usually does this to reply to Hamlets rude remarks. ...read more.

This is a very strong insult towards Polonius as Hamlet is simply saying Polonius's daughter may conceive if she is out which is not a blessing. He then calls Polonius 'friend' which is a form of politeness hinting that Hamlet is just merely giving advice. Polonius's reply is aside which is a dramatic interlude. Polonius replies aside because he cannot give comebacks to Hamlet due to Hamlet's social status. This reflects on the idea of status and authority in the play. Hamlet is clearly upset with himself as he has not yet avenged his father's death which is a burden for him. This is reflected upon when Hamlet tells Polonius he is reading 'words, words, words.' Although this adds humour to the play it also suggests Hamlet is unaware of the context Polonius is speaking in. ...read more.

Finally after Polonius says he is leaving, Hamlet replies once again in a defensive manner 'You cannot, sir, take from me anything that I will not more willingly part withal: except my life, except my life, except my life.' Polonius was simply being polite towards Hamlet but Hamlet seems to be insecure by which he replies such a deep answer trying to tell Polonius that there is nothing Hamlet won't want to give that they will be able to take. The repetition of except my life suggests Hamlet is feeling very depressed and negative about himself. Consequently the audience views Hamlets state of mind in the passage as very sharp and deep in his speech. He constantly uses negative and offensive replies to even the simplest questions. However, in contrast with this the conversation between Hamlet and Polonius is turn taking with each character saying enough. Although their conversation is conflicted with rude remarks it is also a externally polite conversation without argumentative tones. ...read more.