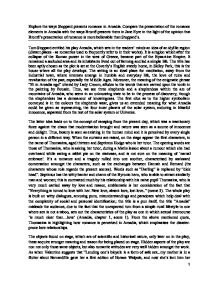 Explore the ways Stoppard presents romance in Arcadia. Compare the presentation of the romance elements in Arcadia with the ways Bront� presents them in Jane Eyre in the light of the opinion that Bront�'s presentation of romance is more believable than Stoppard's. Tom Stoppard entitled his play Arcadia, which sets in the readers' minds an idea of an idyllic region (distant places - as romantics used to frequently refer to in their works). It is a region which after the collapse of the Roman power in the west of Greece, became part of the Byzantine Empire. It remained a secluded area and its inhabitants lived out of farming and led a simple life. The title has been aptly chosen as the plot is set at the Coverly's English stately home, in Sidley Park, this is the house where all the play develops. The setting is an ideal place for meditation, away from the industrial town, where interests emerge in humble and everyday life, the love of ruins and revaluation of the past, especially the Middle Ages. Moreover, the meaning of the enigmatic phrase "Et in Arcadia ego" uttered by Lady Croom, alludes to the words that are carved upon the tomb in the painting by Poussin. Thus, we see three shepherds and a shepherdess within the arc of mountains of Arcadia, who seem in an unknowing state to be in the process of discovery, though the shepherdess has a demeanour of knowingness. The first clue as to the higher symbolism conveyed is in the colours the shepherds wear, gives us an extended meaning for what Arcadia could be given as ...read more.

As Thomasina and Septimus work on their lesson, Thomasina innocently asks Septimus to tell her the meaning of carnal embrace. From this moment, academic knowledge continues to be intertwined with s****l knowledge. After all, Thomasina's main theory, which is central to the theme of the book, rests on the motion of "bodies in heat." Her modern counterpart, Chloe, echoes the specific implications of Thomasina's theory. Chloe suggests that Newton's theory was wrong because he didn't account for the unplanned nature of s****l attraction. Arcadia's language, which has both a colloquial characteristic of the nineteenth century and that of modern England, is a stylized dialogue used to convey sensorial images of 'sight' and 'touch', which have all connotation to the way romance is perceived in Arcadia, while it simplifies the characters' relationships. By looking at the definition given by 'Oxford Dictionary', Arcadia clearly reflects and exemplifies romance as 'a feeling of excitement and adventure, especially connected to a particular place or activity, a story about a love affair set in the past and connects romance with a s****l relationship. Hannah, who is in favour of logic, utters that classical landscape of the past is a 'paradise in the age of reason' whereas the romantic period for her is 'sham..a setting of cheap thrills and false emotion.' The playwright is trying to discuss the change from order to disorder, also conveyed through the use of images of fire, as an element which results into destruction. This element is also used in Charlotte Bronte's novel Jane Eyre, with the same purpose. ...read more.

Thus, in comparing the two works, Stoppard's 'romance' appears to be less realistic due to the continuous reference to science and playful and impassioned speeches, while on the other hand Charlotte's 'Jane Eyre' seems more realistic and allows the reader to relate to her more closely because she is not an idealized figure. Jane has ordinary features and firm morality, her speeches are as well simple and her love towards Rochester was unchangeable but also at the same time unpredictable, very much different from Chloe's words that stressed the s*x as the element that makes human emotions changeable. In conclusion, the images of fire and heat, in Arcadia are presented as destructive and negative, in Jane Eyre it is the opposite, in fact she emphasizes the importance of burning love as the key to personal happiness. Both works end in a mystical experience that brings the characters together. In the final scene, Stoppard beautifully combines the realization of death with an understanding of Thomasina's heat diagram. It represents the idea that all humanity is doomed and destined for a fiery end. However, the dance reveals that there are other types of knowledge to be had in the world and new mysteries to be solved. Through dance, love, carnal knowledge, one might avoid the 'empty shore'. Thomasina suggests that the emptiness can be overcome by dancing (human heat) that will allow new knowledge and fulfilment. At the end Arcadia mixes together memory and desire in a world which is transformed by love. ?? ?? ?? ?? 1 ...read more.