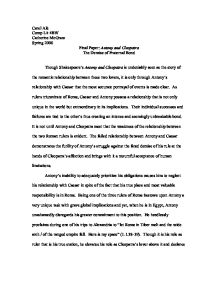 Final Paper: Antony and Cleopatra, The Demise of Fraternal Bond

Carel Al� Comp Lit 4BW Catherine McGraw Spring 2006 Final Paper: Antony and Cleopatra The Demise of Fraternal Bond Though Shakespeare's Antony and Cleopatra is undeniably seen as the story of the romantic relationship between these two lovers, it is only through Antony's relationship with Caesar that the most accurate portrayal of events is made clear. As rulers triumvirate of Rome, Caesar and Antony possess a relationship that is not only unique in the world but extraordinary in its implications. Their individual successes and failures are tied to the other's thus creating an intense and seemingly unbreakable bond. It is not until Antony and Cleopatra meet that the weakness of the relationship between the two Roman rulers is evident. The failed relationship between Antony and Caesar demonstrates the futility of Antony's struggle against the fated demise of his rule at the hands of Cleopatra's affection and brings with it a mournful acceptance of human limitations. Antony's inability to adequately prioritize his obligations causes him to neglect his relationship with Caesar in spite of the fact that his true place and most valuable responsibility is in Rome. ...read more.

that brought him to the pinnacle of his success that verify the notion that Antony belongs to Rome; it is only in Rome and through his relationship with Caesar that he is able to achieve his potential. Antony fails to recognize the validity and truth of his life in Rome and instead, despite his efforts, becomes entrapped in the fantastic world and enchantment of Cleopatra. Cleopatra finds joy in ensnaring men with her charm and Antony, like many before him has fallen victim to her trap. Though many of her actions demonstrate her affection for him, her frivolity towards the relationship express a different sentiment. She describes how her "bended hook shall pierce / Their slimy jaws, and as I draw them up / I'll think them every one an Antony / And say 'Aha! You're caught!'" (2.5.14-17). Like a fish, Antony is being taken out of his own habitat, that place where he was born to dwell in, and forced to live in a situation that will inevitably lead to his death. Cleopatra's portrayal of Antony as merely another one of her conquests brings further validation to the belief that it is not Egypt which is his rightful place but Rome because ...read more.

The greatness that had characterized Antony was not enough to save him from the fated failure of his struggle to reclaim his position in Rome. Even Caesar, his fiercest competitor, recognizes with sorrow Antony's death and proclaims that "the breaking of so great a thing should make / a greater crack" (5.1.17-18). Antony's influence was so far-reaching, that Caesar notes that even the earth itself should have shaken with grief because the impact of his death touched everything. The failure of Antony and Caesar's relationship culminating in Antony's death epitomizes the human limitations that can hinder success. Caesar and Antony's relationship throughout the play offers an extraordinary perspective of the turbulent events that are portrayed in Antony and Cleopatra. It is through the failure of their relationship that the futility of Antony's struggle to salvage the world that he rightfully belongs to, Rome, is most clearly evident. Despite his stately global status, Antony's constant uncertainty about which relationship to honor and his true role, offers a painful example of the human limitations that exists within everyone. The futility of Antony's efforts to fulfill both the roles he has subscribed to allows only for a mournful acceptance of confines determined by our own humanity. ...read more.