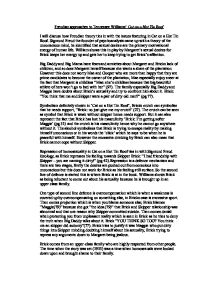 Freudian approaches to Tennessee Williams' Cat on a Hot Tin Roof I will discuss how Freudian theory ties in with the issues featuring in Cat on a Hot Tin Roof. Sigmund Freud the founder of psychoanalysis came up with a theory of the unconscious mind, he identified that s****l desires are the primary motivational energy of human life. William shows this in play by Margaret's s****l desires for Brick keeps her energy up and gets her to keep trying to get Brick's affection. Big Daddy and Big Mama have fears and anxieties about Margaret and Bricks lack of children, and so does Margaret herself because she wants a share of the plantation. However this does not worry Mae and Gooper who are more than happy that they are prime candidates to become the owner of the plantation, Mae especially enjoy sneer at the fact that Margaret is childless "Mae: she's childless because that big beautiful athlete of hers won't go to bed with her" (97). The family especially Big Daddy and Maggie have doubts about Brick's sexuality and try to confront him about it. ...read more.

(pg 42).Repression is a defence mechanism and there are two stages, firstly the desires are pushed out from conscious into unconscious but this does not work for Brick as his feeling still surface. So the second line of defence is started this is where Brick is at in the book. Williams shows Brick as being reluctant to come out about his sexuality because he is brought up in an upper class family. One type of second line defence is overcompensation which is when a weakness is covered up by overcompensating on something else, in Bricks case is excessive sport. Then comes projection which is when you blame someone else; Brick blames "Maggie(79)" because she got "the idea (79)" that Brick and Skipper relationship was abnormal and that one reason why Skipper committed suicide. Then comes denial when protecting you from unpleasant reality which is seen in Brick as he tries to deny the truth when Big Daddy talks about it. Brick "YOU THINK SO TOO? You think me an skipper did sodomy"(77). ...read more.

Skipper is dead which makes Brick angry and blames his wife for the death. Margaret say is begging for Brick attention when she says "Skipper is dead! I am alive!", but Brick does not want to believe that Skipper is dead "I tried to kill your Aunt Maggie, but I failed." Brick definitely does not love Maggie and is shown in different way for example[She kisses Brick on the mouth which he immediately wipes with the back of his hand, (55pg).Bricks s****l desire keep surfacing no matter how much he is trying to suppress, so he tries to get his manhood back by jumping hurdles at the school athletic field but ends up fracturing his ankle. It shows that Brick is weak and helpless without Skipper. But also can be also interpreted to show Freud theory of s****l desires becomes energy for human life. Freud theory can relate to Cat on a Hot Tin Roof because unconscious and s****l desire relate to the character Brick who is trying to suppress his abnormal feeling from conscious to unconscious. In addition there is fear of death by Big Daddy and there are s****l desires. ?? ?? ?? ?? ...read more.

This student written piece of work is one of many that can be found in our AS and A Level Other Titles section.

Related AS and A Level Other Titles essays