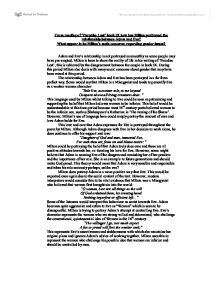 From reading of Paradise Lost(TM) book IX how has Milton portrayed the relationship between Adam and Eve?

From reading of 'Paradise Lost' book IX how has Milton portrayed the relationship between Adam and Eve? What appear to be Milton's main concerns-regarding gender issues? Adam and Eve's relationship is not portrayed as smoothly as some people may have pre-empted. Milton is keen to show the reality of life in his writing of 'Paradise Lost', this is achieved by the disagreement between the couple in book IX. During this period Milton also deals with many social concerns about gender that may have been raised at this period. The relationship between Adam and Eve has been portrayed in a far from perfect way. Some would say that Milton is a Misogynist and tends to personify Eve as a weaker woman character: "Sole Eve, associate sole, to me beyond Compare above all living creatures dear.." This language used by Milton whilst talking to Eve could be seen as patronising and supporting the belief that Milton believes women to be inferior. ...read more.

Milton does portray Adam in a more positive way that Eve. This would be expected once again due to the social context of the text. However, modern interpreters would consider this to be vital evidence that Milton was a Misogynist who believed that women first brought sin into the world: "O woman, best are all things as the will Of God ordained them, his creating hand Nothing imperfect or efficient left..." Some of the listeners would interpret this behaviour as s****t towards Eve. Adam becomes quite aggressive and refers to Eve as "Woman" which is seen to be disrespectful. Milton is trying to portray Adam's attempt at controlling Eve. Eve's character represents the women who are strong willed and determined, who challenge the conventional, quintessential idea of Women in the 16th century: "The willinger I go, nor much expect A foe so proud will first the weaker seek;" This represents Eve's assertiveness and stubbornness with which she maintains her original plans and ignores Adam's advice of working together. ...read more.

Some might say that Milton uses Adam's caring character to represent what happens when women are not controlled and told what is wrong and right. Eve is a perfect example of a disobedient wife who falls into a trap which was intelligently prophesised by the man of the relationship previously: "Firm we subsist, yet possible to swerve, Since reason not impossibly may meet Some specious object by the foe suborned.." This idea represented by Milton emphasises the critical thoughts that women are easily tricked and that men are able to for see these events. Milton uses the extremes of his characters to represent his views. He portrays Adam as a very intelligent and responsible male. Eve on the other hand is represented in a very poor way, as someone who makes bad decisions and cannot cope alone without the support of a male. I believe that Milton was a s****t poet. His portrayal of Eve was unjust and exaggerated. He portrayed Adam as extremely wise and intellectual. These ideas would have been very impacting on a 16th century audience. However, now with modern critics of this poem Milton is consider a s****t in many peoples opinions. ...read more.