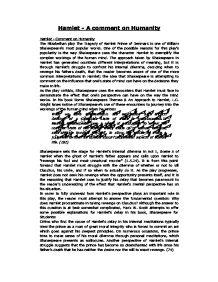 Hamlet - A comment on Humanity Hamlet - Comment on Humanity The Elizabethan play The Tragedy of Hamlet Prince of Denmark is one of William Shakespeare's most popular works. One of the possible reasons for this play's popularity is the way Shakespeare uses the character Hamlet to exemplify the complex workings of the human mind. The approach taken by Shakespeare in Hamlet has generated countless different interpretations of meaning, but it is through Hamlet's struggle to confront his internal dilemma, deciding when to revenge his fathers death, that the reader becomes aware of one of the more common interpretations in Hamlet; the idea that Shakespeare is attempting to comment on the influence that one's state of mind can have on the decisions they make in life. As the play unfolds, Shakespeare uses the encounters that Hamlet must face to demonstrate the effect that one's perspective can have on the way the mind works. In his book Some Shakespeare Themes & An Approach to Hamlet, L.C. ...read more.

In order to fully underezd how Hamlet's perspective plays an important role in this play, the reader must attempt to answer the fundamental question: Why does Hamlet procrastinate in taking revenge on Claudius? Although the answer to this question is at best somewhat complicated, Mark W. Scott attempts to offer some possible explanations for Hamlet's delay in his book, Shakespeare for Students: Critics who find the cause of Hamlet's delay in his internal meditations typically view the prince as a man of great moral integrity who is forced to commit an act which goes against his deepest principles. On numerous occasions, the prince tries to make sense of his moral dilemma through personal meditations, which Shakespeare presents as soliloquies. Another perspective of Hamlet's internal struggle suggests that the prince has become so disenchanted with life since his father's death that he has neither the desire nor the will to exact revenge. (74) Mr. Scott points out morality and disenchantment, both of which belong solely to an individuals own conscious, as two potential causes of Hamlet's procrastination, and therefore he offers support to the idea that Shakespeare is placing important emphasis on the role of individual perspective in this play. ...read more.

As Victor L. Cahn writes, "Hamlet's primary dilemma is that of every human being: given this time and place and these circumezces, How is he to respond? What is his responsibility?" (69). This dilemma defined by Mr. Cahn fits in well with the comments of both L.C. Knight and Mark Scott, because it too requires some serious introspection on the part of Hamlet to resolve, and also supports the idea that Shakespeare is using Hamlet's dilemma to illustrate the effect that perspective, or state of mind, can have on a given situation. Hamlet's delay in seeking revenge for his father's death plays an important role in allowing Shakespeare's look into the human mind to manifest itself. If Hamlet had killed Claudius at first opportunity, there would have been little chance for Shakespeare to develop the internal dilemma which all three critics, L.C. Knight, Mark Scott, and Victor Cahn, mention in support of the widely held view that, in Hamlet, Shakespeare is attempting to make a comment about the complexity of the human mind, and the power that a person's mental perspective can have on the events of his life. ...read more.