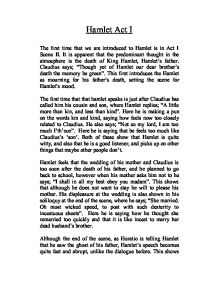 Hamlet Act I The first time that we are introduced to Hamlet is in Act I Scene II. It is apparent that the predominant thought in the atmosphere is the death of King Hamlet, Hamlet's father. Claudius says; "Though yet of Hamlet our dear brother's death the memory be green". This first introduces the Hamlet as mourning for his father's death, setting the scene for Hamlet's mood. The first time that that hamlet speaks is just after Claudius has called him his cousin and son, where Hamlet replies; "A little more than kin, and less than kind". Here he is making a pun on the words kin and kind, saying how feels now too closely related to Claudius. He also says; "Not so my lord, I am too much I'th'sun". Here he is saying that he feels too much like Claudius's 'son'. Both of these show that Hamlet is quite witty, and also that he is a good listener, and picks up on other things that maybe other people don't. ...read more.

Polonius also reflects this view, and tells his daughter to ignore Hamlet. The entire of Act IV seems to reflect Hamlet character and mood. He has come to see the ghost, and even though this is most unnatural he has come any way. This could be because he misses his father, but also because he feels that something is 'rotten in the state of Denmark'. He is unhappy at his mother's speedy marriage, especially to his 'satyr' uncle. Perhaps he feels that the ghost of his father can in some way help him with this. Also he threatens to kill his friends if they do not let him go when the ghost beckons him, even though there is risk; "By heaven I'll make a ghost of him that lets me". He seems to want to speak to the ghost of his father, even more than the risks of following a ghost which may be evil. ...read more.

Also, it may be a way in which he can plan to exact his revenge on Claudius - for he cannot stand to be made to act a son to him. In conclusion, in Act I, Shakespeare sets up the introduction of the story, but also with hints as what is to come later on in the play - he plays on Hamlet use of words to show his distaste for the marriage and his uncle, but also by using the ghost to tell hamlet of its fate and also hamlet pretending to be mad it implies that the rest of the play will be much centred on this, and also make us question as to whether hamlet is still pretending to be mad or whether he has actually crossed over the line to madness. Certainly there are things he does that other people consider madness, but he can also be normal. However, like where he sees Ophelia and is not properly dressed, if he loves her as he says he does it seems that he would not do these things event o her. ...read more.