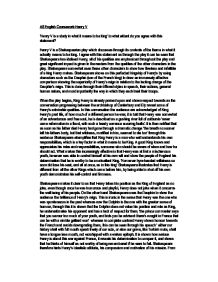 'Henry V is a study in what it means to be king' to what extent do you agree with this statement?

AS English Coursework-Henry V 'Henry V is a study in what it means to be king' to what extent do you agree with this statement? Henry V is a Shakespearian play which discusses through its contents of the theme in what it actually means to be king. I agree with this statement as through the play it can be seen that Shakespeare has idolised Henry, all of his qualities are emphasized throughout the play and great significant impact is given to the readers from the qualities of the other characters in the play. Shakespeare somewhat uses these other characters to show how flawless and infallible of a king Henry makes. Shakespeare shows us this perfected kingship of Henry's by using characters such as the Dauphin (son of the French king) to draw an immensely effective comparison showing the superiority of Henry's reign in relation to the lacking charge of the Dauphin's reign. This is done through their differed styles in speech, their actions, general human nature, and most importantly the way in which they each treat their troops. When the play begins, King Henry is already praised upon and shown respect towards as the conversation progressing between the archbishop of Canterbury and Ely reveal some of Henry's admirable qualities. ...read more.

Although, in Elizabethan times to be king was seen as to be 'chosen by god', thus meaning the king would be godlike and above the rest of the civilians. However Shakespeare portrays Henry as one being superior but in human nature; he has had an ordinary intriguing youth which in turn has given him much experience making him such an extra ordinary King, Shakespeare makes it seem as King Henry knows his people, 'When I do rouse me in my throne of France. For that I have laid by my majesty, and plodded like a man for working-days' he is therefore aware of what his people need and what they desire; because of his past, Henry was able to see as well as live life through the eyes of an ordinary peasant, that is why he is familiarised with his people and understands them well. With this knowledge and experience in mind Henry is able to be a better King as he knows how ordinary people live their lives and will be aware of how his decisions will affect people. A most significant factor in what it means to have the title of King is to be a strong leader, someone who is not afraid to show leadership, and does not feel reluctant in showing control and strength, thus Shakespeare makes Henry ...read more.

to require torture or killing, then how would larger crimes be dealt with 'if little faults proceeding on distemper shall not be winked at, how shall we stretch our eye when capital crimes, chewed, swallowed, and digested, appear before us?' Henry is aware that his people would not support and love him as a leader if he does not relent upon anything; they would feel that he is selfish and inconsiderate and does not comprehend them or the situations in which they have to live in. Although Shakespeare has portrayed Henry as merciful, he is not shown to be weak, as King Henry does not treat people differently, but all his friends as well as the people of his country are treated equally. This is proven when Henry's subjects Cambridge and Grey as well as his good friend Scroop betray him and attempt to plan his assassination on the behest of the French. The young, recently crowned king of England. Henry is brilliant, focused, fearless, and committed to the responsibilities of kingship. These responsibilities often force him to place his personal feelings second to the needs of the crown. Henry is a brilliant orator who uses his skill to justify his claims and to motivate his troops. Once Henry has resolved to conquer France, he pursues his goal relentlessly to the end. ...read more.