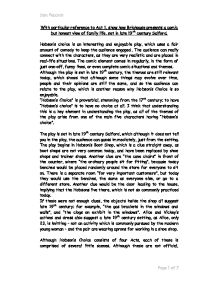 With particular reference to Act 1, show how Brighouse presents a comic but honest view of family life, set in late 19th century Salford. Hobson's choice is an interesting and enjoyable play, which uses a fair amount of comedy to keep the audience engaged. The audience can really connect with the characters, as they are very realistic and are placed in real-life situations. The comic element comes in regularly, in the form of just one-off, funny lines, or even complete comic situations and themes. Although the play is set in late 19th century, the themes are still relevant today, which shows that although some things may evolve over time, people and their opinions are still the same, and so the audience can relate to the play, which is another reason why Hobson's Choice is so enjoyable. "Hobson's Choice" is proverbial, stemming from the 17th century; to have "Hobson's choice" is to have no choice at all. I think that understanding this is a key element in understanding the play, as all of the themes of the play arise from one of the main five characters having "Hobson's choice". The play is set in late 19th century Salford, which although it does not tell you in the play, the audience can guess immediately, just from the setting. The play begins in Hobson's Boot Shop, which is a clue straight away, as boot shops are not very common today, and have been replaced by shoe shops and trainer shops. Another clue are "the cane chairs" in front of the counter, where "the ordinary people sit for fitting", because today benches would be placed randomly around the store for everyone to sit on. There is a separate room "for very important customers", but today they would use the benches, the same as everyone else, or go to a different store. Another clue would be the door leading to the house, implying that the Hobsons live there, which is not so commonly practiced today. ...read more.

being controlled by their father, despite the fact that they are 23 and 21, links with one of the themes of the play - the role of women in society. With reference to the title, this is a great example of the typical, honest situations that Brighouse has used throughout Hobson's Choice, which is why it is such an honest, realistic play. It is because the characters and the situations that they find themselves in are so realistic that the play comes across as so honest. Straight away, Brighouse also lets the audience know that Hobson likes a drink, which is something that features throughout the play. Brighouse does this by introducing Hobson through his daughters, where they discuss that he has a hangover from a Mason's Meeting the previous evening. Again, this is another honest situation, and one which makes Hobson's Choice that bit easier for the audience to relate with and to connect to. If the play was not honest, the audience would not be able to relate with the characters or their situations. The audience can also tell that the girls are scared of their father, as they don't seem to be able to do anything until he is gone, for fear that he will tell them off, despite the fact that they are 21, 23 and 30. One example of this is that Alice says she is expecting someone, which is clear to the audience is a man she is courting, but she does not want her father to know that she is courting. One reason why the play is so honest and easy to believe is the way Brighouse has delicately crafted and evolved his characters, allowing the audience to feel a strong relationship between themselves and the characters. An excellent example of this is the character of Willie. At the start of Act One, Willie seems a very timid character - he knows he's neither clever nor important, and this comes across in both his attitude and his behaviour. ...read more.

Another way memorable comic event is when Maggie tells Ada that she is going to marry Willie. This allows Brighouse to entertain the audience by overturning the convention in drama of two men fighting over a woman by showing Maggie and Ada battling for Willie. This event is also comic as neither Willie nor Ada have any say or control over the situation, despite the fact that 10 minutes previous, Maggie had nothing to do with Willie's social life at all! Another comic situation presented in Hobson's Choice is later on in the play, where Hobson's daughters - previously scared of Hobson - are dictating to him what he is going to do, and they, together with Maggie and their partners manage to trick Hobson into handing them over �500 for Alice and Albert's wedding! What makes this even more comical is that Maggie manages to convince Hobson that it is he who has won, because he only had to give the couple �500 and not �1000! Overall, I think that Brighouse has created a very honest view of family life, and the audience will really appreciate this. He has created a naturalistic setting, which requires no interaction or imagination from the audience to enhance the play, so the audience are a fourth wall audience, which is the contemporary equivalent of a modern audience watching a television soap. Brighouse has enhanced the play with regular comic moments to keep the audience engaged and entertained. The comic episodes are more amusing to a contemporary audience as a lot of them are based around contemporary views and beliefs, such as a woman of 30 being too old to marry, therefore it would be harder for a modern audience to appreciate all of the comedy as well as a contemporary audience, but it is these contemporary views that are conveyed in the play that makes it so honest and realistic. ?? ?? ?? ?? Sam Peacock Page 1 of 7 ...read more.