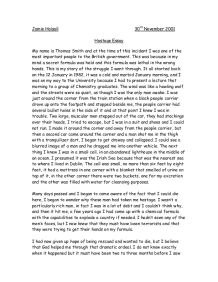 Jamie Halsall 30th November 2001 Hostage Essay My name is Thomas Smith and at the time of this incident I was one of the most important people to the British government. This was because in my mind a secret formula was held and this formula was lethal in the wrong hands. This is my story of the struggle I went through. It all started back on the 12 January in 1982, it was a cold and morbid January morning, and I was on my way to the University because I had to present a lecture that morning to a group of Chemistry graduates. The wind was like a howling wolf and the streets were so quiet, as though I was the only man awake. I was just around the corner from the train station when a black people carrier drove up onto the footpath and stopped beside me, the people carrier had several bullet holes in the side of it and at that point I knew I was in trouble. ...read more.

I had now given up hope of being rescued and wanted to die, but I believe that God helped me through that dramatic ordeal. I do not know exactly when it happened but it must have been two to three months before I saw their faces. The leader of the terrorist group was called Leon Cupola, he was Italian and had a scar down his left cheek, which was possibly caused by a knife. He threatened me with my life and held a gun to my head, he wanted the formula, it was the only thing that could bring his terrorist to war with the Russians, he said to me in an Italian accent. "Look here you Irish scum, I need that formula or else I will shoot you now". I told him to go ahead and shoot me because I knew that I was far too important to him, he knew he wasn't going to shoot me. They threw me back into the cell and another month passed, by now I had no hope, it had all gone, even the small glimpse of being rescued had gone out of the window. ...read more.

Thirteen hours past and the government had not turned up for me, I later found out that they did not turn up for me because they wanted me to die along with the formula and then they would no longer have to worry about me or the formula. Leon had had his formula and was prepared to take me back home and he was true to his word. He took me back to the border of Ireland, I was reunited with my mother and father. Seven months later I received a medal for Bravery and that was the month of total despair, this was because I found out the truth, the formula that I had given Leon was in fact a formula for human cloning and if I had used that myself I would have had a Nobel Prize. At the time I did not know this and so in actual fact the terrorists got a lot more than what they wanted, but I suppose it did not turn out all bad because I got to sue the government for leaving me to die. ...read more.