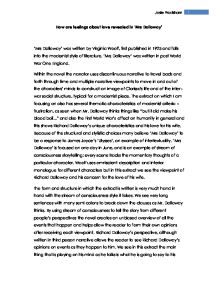 How are feelings about love revealed in Mrs Dalloway

How are feelings about love revealed in 'Mrs Dalloway' 'Mrs Dalloway' was written by Virginia Woolf, first published in 1925 and falls into the modernist style of literature. 'Mrs Dalloway' was written in post World War One England. Within the novel the narrator uses discontinuous narrative to travel back and forth through time and multiple narrative viewpoints to move in and out of the characters' minds to construct an image of Clarissa's life and of the inter-war social structure, typical for a modernist piece. The extract on which I am focusing on also has several thematic characteristics of modernist criteria - frustration, as seen when Mr. Dalloway thinks things like "but it did make his blood boil..." and also the First World War's affect on humanity in general and this shows Richard Dalloway's unique characteristics and his love for his wife. Because of the structural and stylistic choices many believe 'Mrs Dalloway' to be a response to James Joyce's 'Ulysses', an example of intertextuality. ...read more.

The act of writing a pretend stream of consciousness for a fictional character requires intense skill but when written well and made to seem natural it is un-rivalled as a method to show the characters own thoughts and feelings, and furthermore, their love. The love in general in this piece is mainly focused around marriage love, and rather unexciting love. This extract out of the whole book shows a pivotal moment however in Clarissa and Richards's relationship, and the many semi colons and long sentences also add to the tension and emphasise the nervousness Richard is feeling. This nervousness is a reflection of his love for his wife, and his concern for her love of Peter Walsh. The tone in which 'Mrs. Dalloway' is written is, again, following with the stream of consciousness. At times we see an interior monologue from inside Mr. Dalloway's mind with the more structured thoughts "But he wanted to come in holding something." ...read more.

The language used throughout the extract is typical of post-modernism, it is English as we understand it now but with some phrases that we now consider to have been semantically narrowed and not used as much - "Partly ones lazy; partly ones shy." But can be very easily understood today. The word 'miracle' is repeated many times throughout, partly to reflect his love and other times for situations which are not in fact 'miracles' but his nervousness is making him think they are. The diction is advanced, words like "pertinacious" and "undebauched" which would still be understood today if researched, but reflect the high levels of education Richard Dalloway has received, which was of course one of the deciding factors of why Clarissa married him instead of for love. Words like "luncheon" also reflect Richard's high-class upbringing. In conclusion, in the extract Virginia Woolf uses many methods to show love. Many are typical of the modernist period she writes in but many are her own. ?? ?? ?? ?? ...read more.