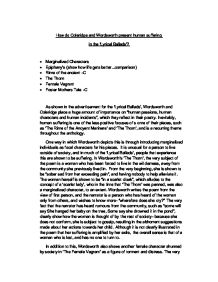 How do Coleridge and Wordsworth present human suffering

in the ‘Lyrical Ballads’?

As shown in the advertisement for the ‘Lyrical Ballads’, Wordsworth and Coleridge place a huge amount of importance on “human passions, human characters and human incidents”, which they reflect in their poetry. Inevitably, human suffering is one of the less positive focuses of some of their pieces, such as ‘The Rime of the Ancyent Marinere’ and ‘The Thorn’, and is a recurring theme throughout the anthology.

One way in which Wordsworth depicts this is through introducing marginalized individuals as focal characters for his pieces. It is unusual for a person to live outside of society, and in much of the ‘Lyrical Ballads’, people that experience this are shown to be suffering. In Wordsworth’s ‘The Thorn’, the very subject of the poem is a woman who has been forced to live in the wilderness, away from the community she previously lived in. From the very beginning, she is shown to be “sober sad from her exceeding pain”, and having nobody to help alleviate it. The woman herself is shown to be “in a scarlet cloak”, which alludes to the concept of a ‘scarlet lady’, who in the time that ‘The Thorn’ was penned, was also a marginalized character, to an extent. Wordsworth writes the poem from the view of first person, and the narrator is a person who has heard of the woman only from others, and wishes to know more- “wherefore does she cry?” The very fact that the narrator has heard rumours from the community, such as “some will say She hanged her baby on the tree, Some say she drowned it in the pond”, clearly show how the woman is thought of by the rest of society- because she does not conform, she is subject to gossip, resulting in the abhorrent suggestions made about her actions towards her child. Although it is not clearly illustrated in the poem that her suffering is amplified by her exile, the overall sense is that of a woman who is lost, and has no one to turn to.

In addition to this, Wordsworth also shows another female character shunned by society in ‘The Female Vagrant’ as a figure of torment and distress. The very title itself is a clear example of a marginalized figure, and the fact that the character is female simply amplifies this. In 1798, at the time of publication, women were popularly shown as weak and in need of saving, a result of the prominence of gothic-horror literature popular at the time. The significance of this in both ‘The Female Vagrant’ and ‘The Thorn’ is that the characters are both generic female personalities, and at the time they were written, it would have added to the marginalisation of the characters. How the protagonist of the poem is shown to be alone, in “gone was every friend of thine: and kindred of dead husband are at best Small help” shows how she has no support, and how she comes to “With tears whose course no effort could confine, By high-way side forgetful would I sit, Whole hours, my idle arms in moping sorrow knit.” The discourse of this simply shows how being apart from society leads to great suffering, the use of ‘idle’ showing that being no use to anyone is painful. In addition to this, it relates to the expression that “the devil makes use of idle thumbs”.

In Coleridge’s writings, he is more likely to use the notion of an epiphany to show human suffering, in that the contrast between before the epiphany and after is a clear illustration of human suffering, very much like that of the Christian theory of an epiphany. ‘Rime of the Ancyent Marinere’, the protagonist is put through the horror of meeting a figure who’s “bones were black with many a crack, all black and bare”, and another whose “skin was white as leprosy”. Coleridge’s use of disease in his descriptions are significant in that they also represent human suffering, and are frightening to the narrator because they are able to relate to it. The narrator is then surrounded by “dead men”, which causes him enormous grief not only through the horror of being surrounded by corpses that “ne rot, ne reek did they”, but also through being the only one left; “Seven days, seven nights I saw that curse, And yet I could not die.” Showing how the narrator sees death as preferable to staying on the haunted ship. However, after his epiphany, he makes such declarations as “O happy living things!”, which clearly oppose his earlier wishes to die. Not only this, but he describes a “spring of love gusht from my heart”, relating to the motif of a spring being a bringer or youth or life, contrasting starkly with his earlier claims of a “curse”.

‘The Foster Mothers Tale’ also shows how a man “found a baby, wrapt in mosses lined With thistle-beards” under a tree, who grows into a child who “never  learned a prayer...But knew the names of birds, and mocked their notes”, a typical Romantic who worshipped nature. In this phase of his life the boy is shown to be “loved”, and happy, yet as he grows, he

“read, and read, ‘Till his brain turned- and ere his twentieth year He had unlawful thoughts of many things.”

This in turn leads to his imprisonment, which not only affects the boy, but causes the man who found him to “[sob] like a child- it almost broke his heart”. Yet, mirroring the events in ‘Rime of the Ancyent Marinere’, the boy soon realises the error of his ways and begins to sing “a doleful song about green fields, How sweet it were on lake or wild savannah, to hunt for food, and be a naked man”. The idea of a naked man could be taken both literally and metaphorically. In the literal sense, it would echo the concept of going back to the earth, and to live naked like animals. Yet in the metaphorical sense Coleridge could have meant ‘naked’ in the sense of without the burden of knowledge which the boy had acquired by reading.