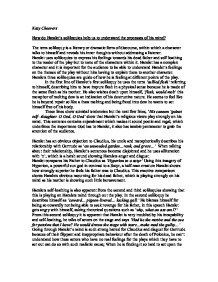 How do Hamlet's soliloquies help us to understand the processes of his mind?

Katy Cheevers How do Hamlet's soliloquies help us to understand the processes of his mind? The term soliloquy is a literary or dramatic form of discourse, within which a character talks to himself and reveals his inner thoughts without addressing a listener. Hamlet uses soliloquies to express his feelings towards his dead father and self loathing to the reader of the play but to none of the characters within it. Hamlet has a complex character and it is important for the audience to be able to understand Hamlet's feelings on the themes of the play without him having to explain them to another character. Hamlets three soliloquies are guide of how he is feeling at different points of the play. In the first line of Hamlet's first soliloquy he uses the term 'sullied flesh' referring to himself, describing him to have impure flesh in a physical sense because he is made of the same flesh as his mother. ...read more.

This emotive comparison shows Hamlets obvious mourning for his dead father, which is playing strongly on his mind as his mother is showing such little bereavement. Hamlets self-loathing is also apparent from the second and third soliloquies showing that this is playing on Hamlets mind through out the play. In the second soliloquy he describes himself as 'coward... pigeon-livered... lacking gall.' He blames himself for being so cowardly not being able to seek revenge for his father, in this speech Hamlet gets angry with himself, asking rhetorical questions such as 'why, what an a*s am I?' From this second soliloquy it is apparent that Hamlet is very troubled by his incapability and self-loathing, he talks of actors on the stage and says 'Had he the motive and the cue for passion that I have? He would drown the stage with tears...make mad the guilty...' Going through Hamlet's mind is such strong hatred for Claudius and disgust for Gertrude because of their flippant and inappropriate behaviour after the death of Polonius, he can't understand how these ...read more.

He says, 'Ere yet the salt of most unrighteous tears...' this line shows his bitterness against him, claiming even her minimal tears that were shed were false. In the third soliloquy Hamlets self-loathing and anger is growing, he starts his speech with 'to be or not to be that is the question' he is really questioning the idea's of suicide again, which he spoke of in the first soliloquy maybe here with more vigour, as his religious righteousness is not mentioned. The rhetorical question he asks himself followed by metaphoric images of life and death as 'a sea of troubles [life]...and end of heartache [death]' are showing his thoughts of being stuck between coping with life being melancholy but too cowardly to perform upon these feelings or death, which possibly would end these hardships. Studying Hamlets soliloquies reveals key understanding to the intriguing and complex mind of Hamlet, through them the main themes of the play are unravelled, for it is within the soliloquies that Hamlets motives for his later actions in the play, such as murdering Claudius are confirmed. ...read more.