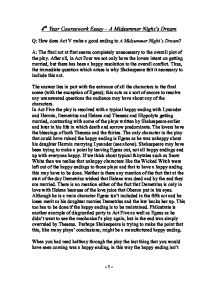 How does Act V make a good ending to A Midsummer Night's Dream?

4th Year Coursework Essay - A Midsummer Night's Dream Q: How does Act V make a good ending to A Midsummer Night's Dream? A: The final act at first seems completely unnecessary to the overall plot of the play. After all, in Act Four we not only have the lovers intent on getting married, but there has been a happy resolution to the overall conflict. Thus, the immediate question which arises is why Shakespeare felt it necessary to include this act. The answer lies in part with the entrance of all the characters in the final scene (with the exception of Egeus); this acts as a sort of encore to resolve any unanswered questions the audience may have about any of the characters. In Act Five the play is resolved with a typical happy ending with Lysander and Hermia, Demetrius and Helena and Theseus and Hippolyta getting married, contrasting with some of the plays written by Shakespeare earlier and later in his life in which death and sorrow predominate. The lovers have the blessings of both Theseus and the fairies. The only character in the play that could have ruined the happy ending is Egeus as he was unhappy about his daughter Hermia marrying Lysander (see above). Shakespeare may have been trying to make a point by leaving Egeus out, not all happy endings end up with everyone happy. If we think about typical fairytales such as Snow White then we realise that unhappy characters like the Wicked Witch were left out of the happy endings to those plays and that to have a happy ending this may have to be done. Neither is there any mention of the fact that at the start of the day Demetrius wished that Helena was dead and by the end they are married. There is no mention either of the fact that Demetrius is only in love with Helena because of the love juice that Oberon put in his eyes. ...read more.

As is fitting for the night of a wedding, the fairies bless the beds of the newly-married Theseus and Hippolyta, as well as those of the other couples, so that they will "ever true in loving be," and have no deformed or ill-fated children. When the fairies bless the beds of the wedded gentry, it is the perfect culmination to the play. The last figure onstage is Puck, whose concluding speech suggests that he and the fairies have put the entire play on for us, the timeless external audience. "If we shadows have offended/" he explains, "Think but this, and all is mended / That you have but slumbered here / While these visions did appear." In other words, if we did not like the play we've just seen, all we need to do is imagine that we - like Titania, Lysander, Demetrius, Bottom and the rest - simply dreamed the entire thing. Just as the men and women in the "Pyramus and Thisbe" play were, in a sense, made to perform a drama by fairy magic (it was put on because of the lovers' weddings which only came about as a result of fairy interference) Puck suggests that we too may be in the magical thrall of powers we do not understand. This, however, is not something we should fear, but instead something we should enjoy. So, too, we the audience - willing victims of the enchantment that is theatre - will be made happy if we allow ourselves submit to its magic. "Give me your hands if we be friends," Puck concludes, "And Robin shall restore amends." This frank speech reflects the way that all the characters in the play have two sides to their character; we not only see Puck's mischievous side but his good side as well. The action has reached a happy and logical conclusion, with no loose strings left hanging. Shakespeare has unified his plot, by weaving together the three disparate worlds of the play but the final speech reminds us that all of the characters are still complex. By Andrew Kirke 4S - 1 - ...read more.