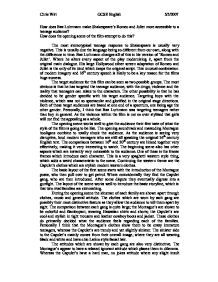 How does Baz Luhrmann make Shakespeare's Romeo and Juliet more accessible to a teenage audience? How does the opening scene of the film attempt to do this?

How does Baz Luhrmann make Shakespeare's Romeo and Juliet more accessible to a teenage audience? How does the opening scene of the film attempt to do this? The most stereotypical teenage response to Shakespeare is usually very negative. This is usually due the language being so different from our own, along with the difference in time. Baz Lurhmann changes all of this in his version of 'Romeo and Juliet'. Where he alters every aspect of the play modernizing it, apart from the original main dialogue. His large Hollywood silver screen adaptation of Romeo and Juliet is the only of its kind which keeps the original script. This unusual combination of modern imagery and 16th century speech is likely to be a key reason for the films huge success. The target audience for this film can be seen as two possible groups. The most obvious is that he has targeted the teenage audience, with the drugs, violence and the reality that teenagers can relate to the characters. The other possibility is that he has decided to be gender specific with his target audience. Targeting boys with the violence, which was not so spectacular and glorified in the original stage directions. ...read more.

The comparison between each gang is quite large; the Montague's are shown to be colorful and flamboyant, wearing Hawaiian shirts and shorts; the Capulet's are cool and stylish in tight trousers and leather cowboy boots and jacket. These clothes do primarily decided what the audience feels regarding each of the families. Personally I think that the Montague's clothes show them to be crazy immature teenagers, whereas the Capulet's are trendy and yet slightly sinister. The sinister side to the Capulet's mainly comes from their overall image, where they are all wearing black and white and have chic Latino style facial hair. The attitudes which are shown by each gang are also very distinctive. The Montague's appear to have a relaxed ignorant attitude which places them in dilemma. Whereas the Capulet's have a hard man, no jokes attitude where any slight insult could spark reaction. The Capulet's attitude is again that of a cowboy, continuing the western theme, while adding to their dark and sinister side. I think overall the attitudes are designed to make the audience prefer the Montague's, as the story then continues to be based around Romeo, a Montague. ...read more.

This adds the overall alternative style of the film, which Baz Luhrmann was trying to achieve. Baz Luhrmann has undoubtedly been successful in making teenagers enjoy Shakespeare and has even started to permanently alter the previously held views. The most critical achievement which must be noted is his choice to use the original script. Without that I think the whole link to Shakespeare would have been far too vague for any real admiration that the film was still Shakespearian. The combination of Shakespearian Language with Modern imagery blends well making the film very watch-able and the language barrier non existent. The Language Barrier is also dulled by the audio and visual effects which often say far more than words. That along with the stylish attire often explaining a lot of the story on its own. I found studying this film quite interesting, possible as I am the supposed target audience which I think is roughly correct. However I think that Baz Luhrmann was probably simply targeting a modern audience rather than a teenage audience. AS a target for his film I would say he has been fairly successful in glamorizing a famous play. Apart from the obvious flaw that I knew what was going to happen next, I enjoyed watching the film. Chris Wirt GCSE English 5/5/2007 ...read more.