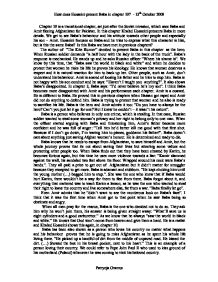 How does Hosseini present Baba in chapter 10?

Chapter 10 is a transitional chapter, set just after the Soviet invasion, which sees Baba and Amir fleeing Afghanistan for Pakistan. In this chapter Khaled Hosseini presents Baba in more details. We get to see Baba's behaviour and his attitude towards other people and especially his son - Amir. Hosseini focuses on Baba and he tries to express what this character is like, but is this the same Baba? Is this Baba we have met in previous chapters? The author of "The Kite Runner" decided to present Baba in this chapter as the hero. When Russian soldier demands "a half hour with the lady in the back of the truck". Baba's response is mechanical. He stands up and he asks Russian officer "Where his shame is". We know by this time, that "Baba saw the world in black and white" and when he decides to protect that woman he risks his life he proves his ideology. He knows that woman deserves a respect and it is natural reaction for him to back up her. ...read more.

Wrapped around his neck were Baba's hands.". They all paid a price to get out of Afghanistan but it didn't matter for smuggler because they excepted to get more. Baba is adamant and stubborn. "He kept choking him until the young mother (...) begged him to stop.". She was the one who knew that if Baba would hurt Karim, there wouldn't be a way for them to flee from there. Baba forgot about it, and everything that mattered was to teach Karim a lesson, as he was the one who wanted to steal their right to leave the country and live somewhere else, far from a war. "Baba finally let go". Even Amir admits that he "didn't want to see the murderous look on Baba's face". I think that it was the first time when Amir got to that point when he saw Baba being so obstinate and angry. When all men pray for the rescue, Baba is the one who decided not to do so. They ask him why he won't join them, his answer is being given straight away: "What'll save us is eight cylinders and a good carburettor." ...read more.

To recap, Baba has been shown in two different lights in chapter 10. The writer decided to confirm that Baba sees the world in black and white and he also showed that Amir's father can be quite violent and adamant just to protect norms and values that he sees as a priority. On the other hand, Hosseini showed that Baba can be quite caring towards his son. Personally, I think that this is Baba, we've met in pervious chapters but in chapter 10 we get to know him better and he proves that he is not a coward and he can take action in a point of honour. Baba is a role model to me, even if he doesn't seem to be a good father I think that he is just trying to teach Amir how to live a life and how not to become a coward. Amir might not understand it but Baba is a reasonable and intelligent man who has his own ideology and he never makes any mistakes. Baba is the hero, patriot and a good and wise man. ?? ?? ?? ?? How does Hosseini present Baba in chapter 10? - 13th October 2008 Patrycja Oramus ...read more.