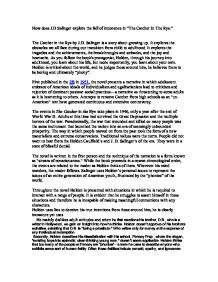 How does J.D Salinger explore the fall of innocence in &quot;The Catcher In The Rye.&quot;

How does J.D Salinger explore the fall of innocence in "The Catcher In The Rye." The Catcher in the Rye by J.D. Salinger is a story about growing up. It explores the obstacles we all face during our transition from child to adulthood. It explores the tragedies and the achievements, the breakthroughs and setbacks, and the joy and heartache. As you follow the book's protagonist, Holden, through his journey into adulthood, you learn about his life, but more importantly, you learn about your own. Holden is critical about the world, and he judges those around him, he believes them to be boring and ultimately "phony". First published in the US in 1951, the novel presents a narrative in which adolescent embrace of American ideals of individualism and egalitarianism lead to criticism and rejection of dominant postwar social practices-a narrative as threatening to some adults as it is heartening to others. Attempts to remove Catcher from high schools as an "un-American" text have generated continuous and extensive controversy. The events in The Catcher in the Rye take place in 1946, only a year after the end of World War II. Adults at this time had survived the Great Depression and the multiple horrors of the war. Paradoxically, the war that wounded and killed so many people was the same instrument that launched the nation into an era of seemingly unbounded prosperity. The way in which people moved on from the past took the form of a new materialism and extreme conservatism. Traditional values were the norm. People did not want to hear from the Holden Caulfield's and J. ...read more.

However he often displays a very immature attitude when talking about such issues. They also signify what he fears most about the adult world: complexity, impulsiveness, and potential for conflict and change. Because people are unpredictable, they Holden feels confronted by them, consequently he is forced to constantly question his self-confidence and self-worth. One reason he may find these human complexities hard to deal with is Allies death. At times throughout the novel Holden encounters opportunities for both physical and emotional intimacy, although he fails to follow this through. Holden desperately continues searching for new relationships, always undoing himself only at the last moment. For example when he invites Sunny the prostitute to his room for a "throw" but when it comes to actually having sex and making the transition into maturity. He claims "I didn't want to do it, I felt more depressed than sexy. And when Maurice confronts him and asks him for more money for a service he didn't even use his childlike vulnerability exposed again. Another key theme of the Catcher in the Rye is "Phoniness," which is probably the most famous phrase from The Catcher in the Rye, and is one of Holden's favorite concepts. Holden uses this label for describing the superficiality, hypocrisy, pretension, and shallowness that he encounters in the world around him. Salinger argues that there is nothing wrong with growing up rather he argues that there is a problem being a "phony" adult. Holden believes that adults are inevitably phonies, and, what's worse, they can't see their own phoniness. Phoniness, for Holden, are excuse for him to continue living in his cynical isolation. ...read more.

Holden's transition into adulthood develops along with the story. Holden regrets his hasty judgment of Mr. Antolini, but this mistake is very important to him, because he finally starts to question the way in which he makes snap judgments about people. Holden realises that even if Mr. Antolini is gay, he can't simply be dismissed as a "flit," since he has also been kind and generous. Holden begins to accept that Mr. Antolini is complex and that he has feelings. However many critics argue that Holden does not mature at all through out the novel is in reality the only person he really connects with is his ten year old sister, therefore he merely reverts back into an immature state of mind. Nevertheless Holden does come to realise that in order to continue to exist in the adult world you must except that lies are necessary in order to maintain the "phoniness" in which adults rely on. Holden's break down reaches its climax towards the end of the novel, when he watches Phoebe go around and around on the carousel. When he watches Phoebe, he finds himself the happiest he has ever been "I was damn near bawling, I was so damn happy." He participates in a scene of childhood happiness and innocence. With Phoebe, he seems to have found the human contact has been searching for. His illusion of protecting children is symbolically shattered. Many critics argue that this is the moment when Holden finally makes the transition into adulthood. Even though Holden does not technically admit defeat, he has undoubtedly gained a mature attitude of acceptance and tolerance. Miss locket I am stuck on my conclusion any ideas would be useful thanks Ashleigh xxxx ...read more.