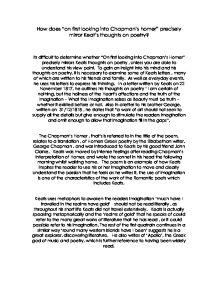 How does on first looking into Chapmans homer precisely mirror Keats thoughts on poetry?

How does "on first looking into Chapman's homer" precisely mirror Keat's thoughts on poetry? Its difficult to determine whether "On first looking into Chapman's Homer" precisely mirrors Keats thoughts on poetry , unless you are able to understand his view point. To gain an insight into his mind and his thoughts on poetry, it is necessary to examine some of Keats letters , many of which are written to his friends and family. As well as everyday events, he uses his letters to express his thinking. In a letter written by Keats on 22 November 1817, he outlines his thoughts on poetry ' I am certain of nothing, but the holiness of the Heart's affections and the truth of the Imagination - What the Imagination seizes as Beauty must be truth - whether it existed before or not. ...read more.

Keats uses metaphors to awaken the readers imagination 'much have I travelled in the realms have gold' should not be read literally , as throughout his short life Keats did not travel extensively. Keats is actually speaking metaphorically and the 'realms of gold' that he speaks of could refer to the many great works of literature that he has read , or it could possible refer to his imagination. The rest of the first quatrain continues in a similar way 'round many western islands have I been' suggests he is a great explorer, discovering literature. He also writes of 'Apollo', the Greek god of music and poetry, which is further reference to having been widely read. He suggests that he has heard of the works of Homer, who he considered one of the great poets, and instills in the reader the richness of Homers works by suggesting that he was powerful and ruled over rich lands. ...read more.

In this way, each person can interpret the scene in a different way, as each reader is allowed to interpret poetry in a different way. With the combined use of metaphors and similes, Keats is able to make the reader aware of the emotions he stirred when he first began to understand Homer's work. It suggests how he found the work inspiring and how he was awakened by the experience. The language Keats uses throughout the sonnet is positive. He talks of 'goodly states' and 'one wide expanse' which create thoughts to the reader of places of beauty. His attempt to create this beautiful scene climaxes in line 7 when he speaks of breathing its 'pure serene'. The sonnet seems to mirror Keats' thought on poetry quite closely because he sees poetry as stirring the imagination and being a journey of discovery as well as creating feelings of beauty and stirring emotions, which are all the qualities the sonnet describes. ...read more.